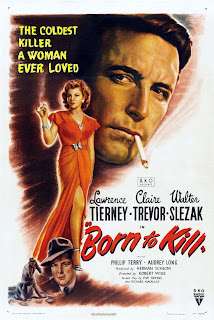 - "As you grow older, you'll discover that life is very much like coffee... the aroma is always better than the actuality."

In true film noir fashion, Born to Kill is as convoluted as can be, with constant plotting and counter-plotting throughout. The story opens with recently-divorced Helen Brent (Claire Trevor) discovering the dead body of her neighbor Laury Palmer (Isabel Jewell) and Laury’s boyfriend in the apartment next door. Rather than become entangled in the situation, Helen keeps quiet and leaves town. It turns out that the killer is another boyfriend of Laury’s, the crazed Sam Wilde (Lawrence Tierney), who becomes worked into murderous rages when made jealous by his love interest. As Helen is on her way back to hometown San Francisco, she meets Sam on the train and becomes attracted to his darkness and underlying fury. With Helen already engaged to a wealthy San Francisco businessman, Sam manages to worm his way into the good graces of the entire family and eventually marries Helen’s sister Georgia (Audrey Long). But the attraction between Helen and Sam never dies and as their affair grows more intense, Sam continues drop bodies in jealous rages. When a private investigator arrives to investigate the original double murder that Helen discovered in Reno, she begins plotting on how to steal Sam away from her sister and manage to keep both of them out of any trouble. 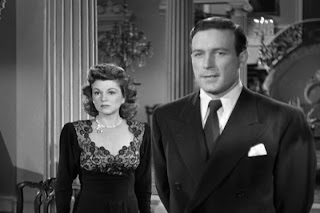 Ranking Robert Wise’s first full-fledged film noir release was hard for me to do. It’s a movie that has individual elements that are very impressive. Lawrence Tierney as the brooding, menacing killer is as sinister a villain as would have been allowed in Hollywood at the time. Claire Trevor is ice-cold in her role as the ambitious woman who cannot overcome her passions and desires. Noir everyman Elisha Cook, Jr. turns in an inscrutable role as the longtime companion of the homicidal Wilde. And in control of it all is Robert Wise, who had worked his way up from editor for Orson Welles to the B-horror films of Val Lewton. All of these components come together to produce an interesting, and at times intense, thriller. But for whatever reason, it does happen to fall short of the sum its parts.

That’s not a huge knock, as it is still strong enough for me to rank it at #71 in the countdown. The story is compelling and edgy enough to keep you engaged. In terms of its “noirishness,” it ranks very high, as at times the repugnance of the characters is jarring. Like I said, though, breaking each element down individually would make someone think that it would come off even better than it does. And I think that the main reason for why it falls a bit short of its potential is that it contains a bit too much polish for its own good. Born to Kill is said to have been granted a sizable budget by RKO standards, which in this case I think was unnecessary. The story never feels as sleazy as it is intended to be. I suppose what I am saying is that it might have been better served to adopt a much more overt “Scarlet Street-like” seedy atmosphere. As sinister as Tierney manages to be as Sam, the darkness never quite reaches the level of classics of the style. 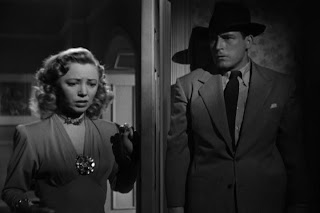 But why focus only on the negative? After all, I’m still placing this one ahead of some outstanding movies. The two leads work well together, and Tierney’s performance is one that will always be remembered for its intensity. The brutality seen in Sam Wilde is hard to match, particularly when taking into account that the film was made in 1947. Even if someone finds the story a little too pat, with a bit too many improbable events coalescing, then there is certainly enough to be found in the direction of Robert Wise. His proficiency and ease with the camera is marvelous, underlining the years put in working with a master technician like Orson Welles. The sequence at the beginning of the film, with the murders and then Helen discovering the two corpses next door displays how adept Wise could be at telling a story through pictures. And there are also more subtle camera and editing movements – such as one in particular, where the camera watches Tierney lying on the bed smoking a cigarette and talking on the telephone – where Wise is able to reinforce the simmering fury of the character by descending the camera in toward his face. It might not be earth-shatteringly inventive, but it’s incredibly effective.
Posted by Dave at 12:05 AM