- "Personally, Veda's convinced me that alligators have the right idea... they eat their young."

On the heels of the placement of Pickup on South Street, which shocked even me as the list-maker, we come to another film that I originally slotted in much higher than it now resides. I re-watched this one in the large batch of noirs that I made sure to get before I started the countdown. This film-watching binge included ones that I had previously and first-time viewings, with the result that an initial rough draft was radically altered in spots. The dropping of Mildred Pierce to here at #54 is not so much a reflection of a decline in my own assessment of the film, but more the result of “new” noirs entering the countdown very high or repeated viewings moving up other strong contenders. This is still a wonderful movie, and the kind of film that reminds one of how capable the Hollywood system of the 1940s was of continually churning high quality melodramas and mysteries.

This is the film that returned Joan Crawford to the pinnacle of Hollywood stardom. It is easy to repeat this folklore now, but at the time that Mildred Pierce was made, Crawford’s career was waning. Crawford rose to prominence 1920s silent films before moving to MGM in 1930. She worked at MGM for 13 years and arguably became _the_ starlet of the screen – the so-called “First Queen of the Movies.” But by 1943, some of that luster had worn away, and rather than force her to fulfill the one film left on her contract, MGM opted to buy out the $100,000 balance and part ways. She signed at Warner Brothers shortly after the release, and early in her stint there she ran into resistance landing the choicest roles, due to the fact that she was no longer her studio’s marquee star. Bette Davis was the one picking and choosing the top-notch roles and it was only after she declined the lead in Mildred Pierce that Crawford landed the part. Not even veteran director Michael Curtiz wanted her involved in the production, going so far as to demand that the experienced Crawford perform a screen test. She obviously impressed him enough that he relented. The result is another of those fortuitous breaks that seem to be sprinkled throughout Hollywood history. 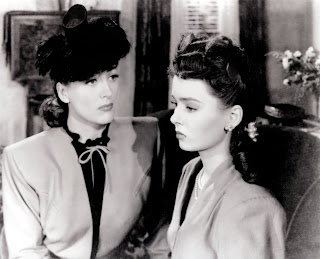 Crawford turns in a superlative performance as the title character, a woman who leaves her husband (Bruce Bennett) and attempts to survive and support her two daughters independently. Mildred is convinced that her daughters, particularly the oldest Veda (Ann Blyth) deserve more than her unemployed husband can provide and thus is determined to do whatever is necessary to provide it for them. The eternally ungrateful Veda is mortified when her mother takes a job as a waitress, but when Mildred decides to open up her own restaurant, the family fortunes begin to surge. She is assisted by Wally Fay (Jack Carson), her husband’s former business partner, and Monte Beragon (Zachary Scott), a wealthy California heir. The restaurant becomes a huge success and Mildred begins showering lavish gifts upon Veda, particularly after her other daughter dies from illness. Along the way, she also is officially divorced from Bert and marries Monte. But her life is complicated even more as the relationship between the unappreciative Veda and her new husband becomes uncomfortably close. Monte then begins playing mother against daughter, with murderous results.

As anyone who has seen the film knows, all of this is told in flashback, with Monte’s murder taking place in the opening moments. This opening sequence contains incredibly impressive photography from Ernest Haller – in fact it’s the most impressive work that I have seen from the veteran cinematographer. The beach house setting feels like it is completely isolated, cut off from everything else, and the shadows literally leap and dance across the rooms. The diagonal angle of the shadows in these scenes is intentionally disorienting and with the deft direction of the continually under-appreciated Michael Curtiz it is all the more unsettling. My love of Curtiz and his work has been well-established on this blog and while I think his two unconditional masterpieces had already been made (Angels With Dirty Faces and Casablanca), this one is just a small notch below. 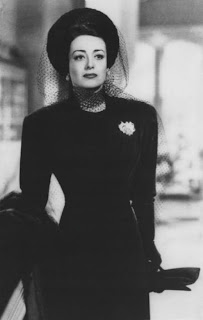 But let’s not kid ourselves; as outstanding as the work of Haller and Curtiz is, there is a reason that what is most remembered about the film is Joan Crawford. She deserves the praise she gets. What convinces me of this performance’s greatness is how effective Crawford is able to make me believe that she is a woman struggling. This is a huge compliment, because when I think of Joan Crawford I picture a fiery, forceful personality. I know that this doesn’t necessarily have anything to do with the roles she chooses, but sometimes it can be hard to separate the two. As Mildred, that fierceness eventually emerges, but not before we get to watch her work her to that point after struggling and earning her way through determination and hard work. It really is a performance for the ages.

Oh, and since I routinely give short shrift to scores and composers, don’t overlook the contribution of the legendary Max Steiner. It’s not his best, but it certainly adds to the film.
Posted by Dave at 12:05 AM