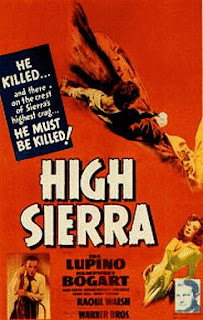 Many would argue that High Sierra might be more properly classified as a gangster film, akin to the great crime dramas like Angels With Dirty Faces or Scarface. Raoul Walsh was the director of The Roaring Twenties, one of the greatest of the classic era gangster movies. Writer W.R. Burnett also had a pedigree as being an integral part of those cycles of films, providing either the source material or screenplay for classics like Little Caesar and Scarface. Humphrey Bogart rose to prominence in the 1930s on the strength of performances in support of superstar James Cagney in Angels With Dirty Faces and The Roaring Twenties. Even the producer, Mark Hellinger, was behind many of these aforementioned films. So it has the traits of another in the line of classic gangster films. It’s inclusion in this countdown underscores a key point in the development of noir: the natural progression that was made from gangster films into what would come to be known as film noir. There are many similarities between the two. And so the most proper classification of High Sierra would likely be that of a transitional film, and one of the early ones to bridge the gap between the gangster films of the 1930s and the noir that would flourish for the next two decades.

One of the best treatments of the difference between gangster films and film noir is an appendix to Film Noir: An Encyclopedic Reference to the American Style by Alain Silver and Elizabeth Ward (an excellent reference book, by the way). They argue that one of the key differences is that, on the whole, the gangster films maintained a sense of distorted idealism – gangsters like Tom Powers and Rico Bandello using crime as a means to rise above the slums and squalor of city life. Conversely, lead characters in noirs tend to see their demise coming, ruminate on why they are about to take a fall, and oftentimes simply accept it. Although a generalization, and not likely to fit every film that is analyzed, I think that this is a convincing argument and one that certainly applies to High Sierra. 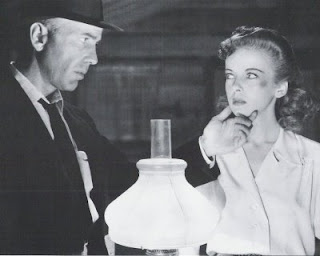 Humphrey Bogart stars as Roy Earle, a recently paroled bank robber who begins working on his next job the minute he secures his crooked release from prison. Traveling to California to lead a robbery of an upscale hotel, Roy meets a family of transplanted Okies on their way west. Roy quickly develops an eye for the granddaughter Velma (Joan Leslie), a clubfooted girl who charms Roy with her innocence. Arriving at the secluded resort where the job will be planned, Roy discovers that his two partners (Alan Curtis and Arthur Kennedy) have a woman from Los Angeles staying with them. Marie (Ida Lupino) is a former dancer who is attracted to the prospects of parlaying an association with the criminals into a better life. Roy at first tolerates her, and then develops a friendship, while Marie almost instantly falls for the famous gangster. Roy also maintains contact with the Okie family, visiting them in order to drop off money to have Velma’s foot fixed. He clearly has plans to marry Velma once he successfully pulls off the robbery. Complications with the heist, followed by Roy being spurned by a now-mobile Velma, leads to Roy and Marie going on the run with the faint hope of cashing in on the heist and then escaping to freedom.

The visual style of the film is certainly not traditional noir, as the bulk of the story takes place in the wide open mountain landscapes of California. There are not the usual light-dark contrasts and shadows lurking at every turn. What qualifies this film as a noir, in my opinion, is what Silver and Ward described in their outstanding essay. Roy is a man who knows that his life is on a path toward destruction, and even tells Marie that traveling with him is a quick way to wind up dead or in trouble. As Doc Banton (Henry Hull) tells Roy, he is the kind of guy who is “just rushing toward death.” Roy acknowledges as much, constantly talking about “crashing out.” He knows his end will not be pleasant, but seems to know no other way to live. In attempting to help Velma and marry an innocent, respectable girl, he makes an attempt at vindication. But as is common in noir, he seems fated to never achieve such respectability. 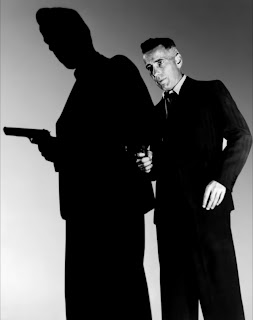 The historical significance of High Sierra is probably even more important than the actual merits of the movie. Bogart had to finagle his way into the role of Roy Earl by convincing George Raft, who was hoping to break free of gangster typecasting, to turn down the offer. When Raft complied, Bogart got the nod for a role that he had coveted since first reading the screenplay. This is the film that catapulted Bogey to the status of the brightest star in Hollywood. High Sierra would be the last movie in which he did not receive top-billing, and the classic films and roles that instantly come to mind when the name “Bogart” is mentioned would come in the next few years.
Posted by Dave at 12:05 AM