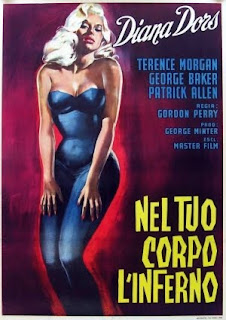 I’m almost certain that the excellent British noir Tread Softly Stranger is the least-viewed movie in this entire countdown. I know that Sam and Tony have seen it and I am confident that they will chime in with their usually excellent comments, and I’d probably be willing to bet that being from the UK, Judy has probably at least had the opportunity to see it. But outside of them, I’ll be pleasantly surprised if anyone else has watched it. Or, maybe I’m just completely out of it and this is more well-known than I think. I never would have seen it myself if it was not for Sam, who told me that I needed to see it before I completed a list for the noir countdown. He was right, of course, but even more than a placement in the countdown, it also deserves to receive more attention and be more widely viewed.

I have to admit that prior to watching Tread Softly Stranger, I knew absolutely nothing about Diana Dors. I could be wrong, but I’ve since come to the understanding that in the United Kingdom she was akin to the blonde bombshells of Hollywood lore. But don’t let such a label fool the uninformed – this was not just a pretty face, thrown on the screen to draw viewers just to ogle her. Now, granted that I am basing this on seeing exactly one of her movies, but it seems quite clear there was legitimate acting talent with her. Like Marilyn Monroe or other Hollywood starlets, it would be easy to dismiss her as just another pin-up, but that would be an unfair dismissal. Beauty may be the main reason that she was ever given an opportunity, but at least in this case that mysterious magnetism is what makes her character so effective. 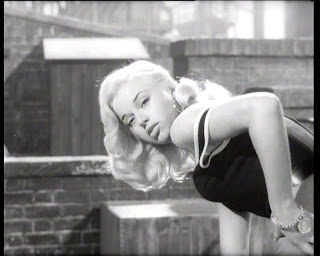 The film opens on Johnny Mansell (George Baker), a high-stakes London gambler who has been on a losing streak. With bookmakers calling in his debts, and with no way to make good on his losses, Johnny decides to head back to his hometown of Rawborough until the heat cools. Arriving back home, Johnny takes a room next to his bookish brother Dave (Terence Morgan), an office worker at the local factory. Whereas Johnny has the carefree attitude of any big time gambler, Dave is the much more serious, practical type. But somehow, Dave has managed to land the alluring Calico (Diana Dors), a hostess and dancer at a local nightclub. Calico is a fish out of water in Rawborough, a dreamer who desperately wishes to escape the drab industrial town. Perhaps this is what draws her to Johnny, the fact that he had already shown himself capable of working his way to the big city.

Upon returning to town, Johnny quickly discerns the fact that his brother is struggling from severe financial difficulties. Pressing him for details, he learns that Dave has been embezzling money at the steel foundry in order to keep his hold on Calico. Dave has been cooking the books to cover his trail. But he reaches the point that he is paranoid that the entire office is going to be audited any day and he realizes that he is done for if his “creative accounting" is discovered. It is then that Johnny is told about the plan that Calico has been pressing on Dave – the idea to rob the foundry payroll so that the embezzled funds will be overlooked and the extra profit will set them up for life. Originally dead set against it, Johnny is eventually pulled into the plot, through a variety of noirish twists, which predictably goes haywire from the start.

The entire film has a wonderful working class, pulpy feel to it. The steel town feeling of Rawborough is easily relatable to cities throughout the United States, and presumably around the world, proving once again how universal many noir traits are. Probably the most appealing thing about the entire movie is how real the principal characters feel – the tenet of ambiguous characters that is so essential to noir is illuminated brilliantly. There is no completely good or bad character. As a gambler, Johnny is the one that would traditionally be identified as morally suspect, but as the story progresses he begins to show himself to be the most upright of the bunch. Dave, on the other hand, should be the more admirable of the two, holding a respectable job and working for a living. Instead, Dave too struggles to overcome his weakness for Calico and drags his brother down with him. And then there is the perfectly cast Dors as Calico. Director Gordon Parry introduces her with a memorable entrance and ultimately shows her to be the ultimate seductress. 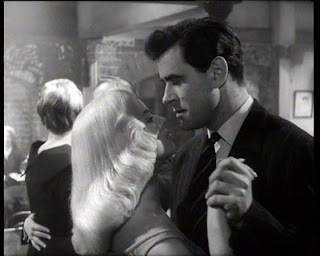 I’ve read reviews around the ‘net that conclude that Tread Softly Stranger is a B-movie that has some merit but that is ultimately an average noir. Don’t listen to them – they’re dead wrong. This is a wonderful film noir and among the best that I have seen to come out of the UK.
Posted by Dave at 12:05 AM