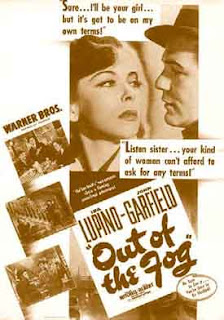 Yes, more Ida Lupino. Even more importantly for the countdown is the debut appearance of one of the few men who I think can justifiably lay claim to being _the_ leading man of film noir. I know, I know, that’s a bold claim, and I’m not sure that I necessarily would place him above the likes of Mitchum, Bogart, Lancaster and others. But the more films that I have watched for this series, the deeper my appreciation of the work of John Garfield continues to grow. He’s one of my favorite actors of all-time, regardless of genre or era. And in Out of the Fog, he delivers a wonderfully smug performance as waterfront racketeer Harold Goff. Goff is a swaggering, ruthless gangster, and what makes him all the more awful is that he knows it. He just doesn’t care. Garfield makes that conceit and arrogance shoot off the screen. 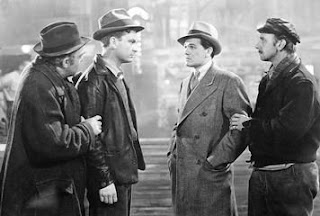 The script from writing team Robert Rossen, Robert Macauley and Jerry Wald does an outstanding job of adapting a stage play from Irwin Shaw to the big screen. In retrospect, knowing that it was based on a play makes sense, as scenes are set up in rooms or on the same dock and are usually left to play out within that confined area. But what the screenplay manages to do is to take something that had previously been performed on stage and inject a wonderful sense of nighttime on the docks of Sheepshead Bay. Nearly every scene is set in the darkened night, with fog always looming, and almost everything takes place on or around the docks. The cause of the fear that grips everyone on the docks is Goff, a tough guy who makes his living by extorting protection money from all the fisherman and boat owners in the area. When locals Jonah Goodwin (Thomas Mitchell) and Olaf Johnson (John Qualen) acquire a small boat for their personal fishing adventures, Goff even moves in for kickbacks from them. As the pair haggles, but ultimately gives into the demands, the situation is complicated when Jonah’s daughter Stella (Ida Lupino) meets and falls for rising racketeer Goff. Stella longs for a way out from the struggling existence of Sheepshead Bay and sees the flashy Goff as the perfect opportunity. 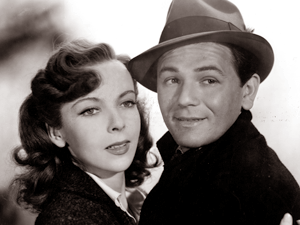 On one level, the romance between Stella and Goff makes sense, as Goff is able to flash money and presents on the young girl to win her over. Things like promising steamship trips around the world would certainly do the tick. On the other hand, the one sticking point to the story for me was why Jonah never simply made Stella well aware of the fact that her newfound boyfriend was bleeding her own parents dry? It then seems like the breaks would at least temporarily be put on the affair. This is more of a commentary on Shaw’s original play, I would guess, rather than the actual screenwriters and filmmaker. Chalk it up to one of those minor plot details that you either go with or you don’t. I went with it, because at times it seems like Garfield as Goff truly is conniving and charismatic enough to pull off the deception. I already mentioned the darkness and shadows overtaking everything in the film, which is an acknowledgment of the work of James Wong Howe. Wong Howe is a fascinating individual and one of the finest cinematographers of the era. His work is the key contribution that makes Out of the Fog feel like a genuine movie, rather than a play on film.

My guess is that this one is not well known, which is a shame. Then again, this could certainly be one that I rank this high because of the memories it arouses in me due to the particular circumstances and timing of the first time that I watched it. I won't bore everyone with more "cancer stories" but will say that it was a movie that I watched at a pivotal moment in my own life, so it will always maintain a special status for me. For everyone else, though, John Garfield’s performance is too good not to be seen and appreciated.
Posted by Dave at 12:05 AM