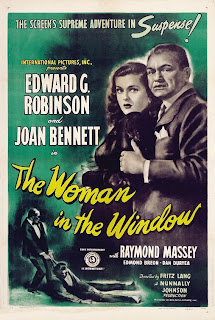 I don’t believe there could be a more fitting way to open a Top 100 noir countdown than with a movie from the master himself, Fritz Lang. Of all the names one could propose as being the preeminent director of the genre (or style, depending on your definition, but we won’t really get into that), Lang would have to be on any reasonable shortlist. If he’s not the greatest, he’s at least near the top. And so we begin this countdown with a Lang noir that most observers actually rate much higher than me. As a mystery, The Woman in the Window exceeds nearly any other movie in all of film noir – that is, until the conclusion that explains why such a well-made and well-acted film checks in at #100 on this countdown rather than in a much higher position.

It is impossible to discuss the plot of this movie, or analyze it at all, without giving away major spoilers. I will try not to obviously give away everything, but I’m at least giving fair warning right now that it’s possible. The focus here is Professor Richard Wanley (Edward G. Robinson), a middle-aged man, bored with life, whose only excitement seems to come from the philosophical discussions he engages in with friends his swanky social club. When Wanley becomes enamored with a painting of a young girl in a nearby storefront, they chide him about his new fascination with a young lady. Later that night, when Wanley stops to view the painting again, he suddenly sees the woman herself (Joan Bennett) reflected in the storefront glass. Stunned, the married Wanley buys the beautiful girl a drink and then goes back to her apartment. Suddenly, Wanley finds himself in a dire situation, when Alice’s boyfriend storms the apartment and Wanley must kill hims in self defense. Scrambling, they resolve to dump the body, but things do not go smoothly and clues are left behind in the confusion. As the police begin to piece together the clues, Wanley and Alice also must deal with extortion demands from the dead man’s bodyguard (Dan Duryea) who threatens to go the police unless he is paid off. 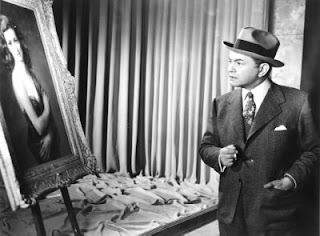 It is a wonderful set up for a movie that plays like an edge-of-your-seat thriller in parts. Wanley’s exertions to hide the body, and witnessing the clues that he inadvertently leaves for future investigators in the process, lay the groundwork for a fall from grace for the mild-mannered doctor. The paranoia experienced by Wanley as he watches firsthand the murder investigation unfold, is gripping, on par with anything that Alfred Hithcock did. The problem, again, is in the conclusion. Everything is moving inexorably toward Wanley reaching a breaking point, leaving everyone wondering how he will find a way out, and then… the letdown. Lang himself later tried to justify the dream scenario, arguing that the movie was truly about psychology, not necessarily evil. Is that a feasible argument? Perhaps, but it still doesn’t erase the feeling of witnessing a complete copout to end the film.

The story and most of the cast is similar to the far superior Scarlet Street, which Lang released a year later. Perhaps that is why I feel so strongly about the deficiencies of this film – when you compare it to Scarlet Street, it becomes obvious that the happy ending is indefensible. Still, this is a film that deserves a place in a countdown like this because it is such a great ride up until the conclusion. With Fritz Lang, Edward G. Robinson, Joan Bennett, and Dan Duryea, all of the ingredients are there for an all-time classic. And they managed to take the first steps in that direction, but ultimately produced a compromised near-masterwork.
Posted by Dave at 12:05 AM