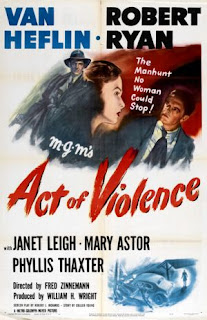 Here is another movie early in this countdown that I rate a bit lower than most other observers, but still an outstanding noir, coming from a director not normally associated with this type of film. It is an obvious precursor to classics like Cape Fear, and for the first thirty minutes or so it is every bit the equal of the later Mitchum-led film. Ultimately, it fails to maintain the tension created in the opening third, but the entire way through it is a feast for the eyes and a textbook in noir cinematography.

Possibly the high point of the entire film comes in the opening, wordless sequence. Cinematographer Robert Surtees employs the traditional darkness and shadows of the noir world to film a man limping past a nearby harbor. The camera follows him as he enters an apartment, methodically retrieves a revolver and picks up a suitcase. He then proceeds to a bus depot and hops a Greyhound for Los Angeles. The man, we come to learn, is Joe Parkson (Robert Ryan), a World War II veteran who survived years in a Nazi POW camp. He is trekking cross-country in order to confront a former WWII comrade who was housed in the camp with him. Joe is convinced that Frank Enley (Van Heflin) was the cause for the massacre of a number of inmates as they tried to escape from the camp. Joe was only wounded in the shootout, but the experience leaves him determined to get even with Enley. So he begins to stalk him like a lion does its prey, terrorizing Enley and his young wife Edith (Janet Leigh). His late-nights visits terrorize the couple, to the point that Enley has to physically retreat from his own home. After years of trying to bury his traitorous act, Enley is clueless as to how to respond to the reappearance of his former pal. 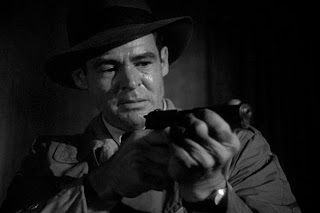 The lead performances are solid enough. I have to be honest that Robert Ryan has never been a personal favorite of mine, so if a movie depends upon him exclusively to carry a film, it’s probably going to fall short for me. Van Heflin fits the role of the ideal husband and businessman craftily hiding a dark secret. But the true stars remain Zinnemann and director of photography Robert Surtees – and in all honesty, I’m going to focus on Surtees, a man whose name should be more well-known than it is. Those that don’t immediately recognize his name will certainly be familiar with his credits – King Solomon’s Mines, Ben-Hur, Mutiny on the Bounty, The Graduate, The Last Picture Show, and The Sting just to name a few. What is the best cinematography that he produced in his career? That’s a highly debatable topic, but I would argue that The Last Picture Show is the only one that might outdo his work in Act of Violence. Surtees and Zinnemann combine to produce some of the most iconic shots in all of film noir. Just look at the screencap below, of Enley running out of a tunnel as if being pursued by some inescapable horror. That, to me, is a perfect summation of this entire style and era of films. 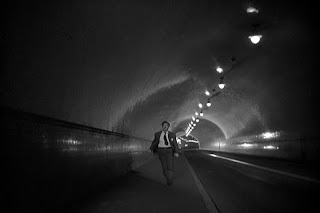 For me, the story at times falters, and there were certain episodes that had me scratching my head. For instance, I understand Enley’s need to just get away from the situation when Joe suddenly appears, but just running off by himself and leaving his wife to fend for herself seemed… bizarre. Little things like that, which probably did not bother others, but that stick with me. Stylistically, though, Act of Violence is top-flight noir, worth viewing if for no other reason than to marvel at the aforementioned opening sequence and the well-paced finale in which Frank makes peace with his past.
Posted by Dave at 12:05 AM