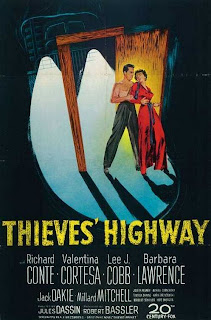 - “Everything happens to me. The whole street, he's gotta break down in front of my place.”

Yes, more Richard Conte. Going into this countdown, I knew that a core group of actors and actresses would emerge, popping up in almost every entry in the series. So far, it has been the Richard Conte and Edward G. Robinson Show, with both already making multiple appearances. The great thing about Conte in this era was the versatility in his acting. He could play the innocent fall guy, such as his role as the wrongly imprisoned Frank Wiecek in Call Northside 777. He could be equally believable as the ambitious reporter in The Blue Gardenia. As will become obvious with later entries in the countdown, he could portray an out-and-out villain as well as anyone else in Hollywood. In the case of Thieves’ Highway, his Nick Garcos is a genuine good guy, albeit a brash man bordering on overconfidence.

Coming home from the war, Garcos returns to the farm country of California to find that while he was away his father was crippled in a suspicious truck accident. Furious over the poverty that his family has been forced to live in due to his father’s inability to work, Garcos vows revenge on the man that he holds responsible for the accident – a shady produce dealer named Mike Figlia (Lee J. Cobb). Taking the money he saved while in the service, Nick decides to invest in a surplus troop truck and begin hauling produce, teaming up with friends and acquaintances of the family. When he and partners Ed (Millard Mitchell), Pete (Joseph Pevney) and Slob (Jack Oakie) begin hauling two loads of apples for San Francisco, they believe they are in line for a big payday. Instead, when they reach the markets, Nick is lured to the room of a beautiful temptress (Valentina Cortese) at the order of the shifty Mike Figlia. While Nick is being wooed by the woman, Figlia swoops in and sells the load of apples himself. Thus, what ensues is a tale of revenge and cutthroat business dealings, set against the backdrop of fresh food markets, an industry notorious for its corruption. 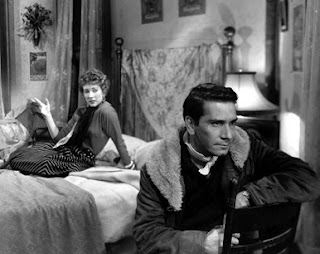 Directed by Jules Dassin and with a script by the great A.I. Bezzerides, a jaded observer could view the entire production as a leftist critique of America and the capitalist system. This would be an easy route to take, as Dassin’s troubles with the House Un-American Activities Committee are well documented and he would flee the United States entirely four years later. Bezzerides’ travails are not as well known, but he too experienced intermittent difficulty finding writing jobs because of his “leftist sympathies.” All of these points are well and fine, but I think that the critique put forth by Dassin and Bezzerides can be acknowledged by any free-thinking minds at the other end of the political spectrum. The critique is not a simple: “Capitalism is horrible!” declaration. It is instead the apt acknowledgment by a grizzled writer like Bezzerides of making it in the business world can be a truly ruthless enterprise – perhaps justifiably, perhaps not. Unfettered free enterprise can be a dangerous thing, even in something that could seem as trivial as the sale of fruit. The character of Mike Figlia is the obvious manifestation of this fact. In Nick Garcos and his partners, we see men trying to figure out how to deal with such powers. Comply? Resist? In the end, neither option seems to offer a consistent answer.

I maintain that the three key personalities of the film – Dassin, Bezzerides and Conte – would all go on to even greater heights. In the case of Dassin, he had already made superior films, and would do so again in the future. Bezzerides and Conte had all-time classics awaiting them in the years ahead. But in Thieves’ Highway, they came together to make a film to make you ponder important issues.
Posted by Dave at 12:05 AM