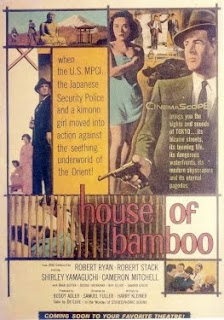 I know, I was shocked too when I found out that Robert Stack did something other than creep out young kids with his chilling narration and startling persona on Unsolved Mysteries…

I’m kidding of course, as his greatest fame is undoubtedly as Eliot Ness in The Untouchables. But to those of my generation, he will almost always be identified as that scary guy who hosted Unsolved Mysteries. Here, though, he is paired with a director that is perfectly suited for an actor that can capably exude a tough guy persona. Stack is not only capable, but shines as this type of character, playing Eddie Kenner as a tough guy that feels very authentic. In many noir and gangster pictures of this era, the macho tough guys come across as caricatures or imitations of past celluloid hoods. Stack as Kenner, on the other hand, feels real, as does Robert Ryan for that matter, lending the key dynamic of the film a sincerity that elevates the film. Aside from the visuals, this is what sticks with me most from House of Bamboo – the genuinely brutal nature of principal characters. It doesn’t feel like fictionally created bravado, but rather the callousness that would be necessary to truly dominate a criminal empire.

This is a loose remake of 1948’s The Street With No Name, another classic-era film noir that (drum roll please…) I’ll go ahead and reveal will also be seen in this countdown. So I obviously enjoy the original a bit more. Still, it has to be acknowledged that the theme of an ex-con being used by the police to infiltrate a gang is not exclusive to The Street With No Name. The connection between the two is made even stronger, though, by the fact that both screenplays were written by Harry Kleiner, so there is no denying the direct inspiration and influence of the 1948 film. Fortunately, this remake is distinctive enough to stand on its own, due to both its production and its unique setting.

The most obvious change is the fact that Fuller’s film is shot in color and CinemaScope, which in the minds of some traditionalists goes against the true nature of noir. And while I’ll concede that I like to see the stark blacks and whites of the classic era, I disagree. In fact, the cinematography in this film is outstanding. It is also aided by being one of the first movies shot in postwar Tokyo. The nature of the locales has an exotic flavor, highlighting unknown entities like pachinko parlors, Buddha statues, the unique houses and buildings frequented by the various characters. Even though everything is shot in color, these Tokyo streets and parlors retain the gritty feel of underworlds across the globe. The outdoor scenes are beautiful as well, particularly the opening train robbery sequence in which Fuller and cinematographer Joseph MacDonald make full use of CinemaScope to highlight the wide open scenery of the Japanese countryside. The image of the train moving across an overpass, with the towering Mount Fuji in the background, is exquisite stuff. It aspires to be something more than a simple cat-and-mouse crime story, but what holds it back slightly is the fact that it never elevates to that level. There seems to be a statement being made concerning the clash of the American and Japanese cultures, but the Japanese female lead tended to drag the story. It works best as the brutal crime film it truly is, allowing Fuller to craft that tough guy characters that he loved to work with.
Posted by Dave at 12:05 AM