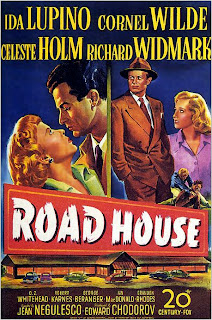 - "She does more without a voice than anybody I've ever heard!"

A strong case can be made for classifying Road House as a straight melodrama. In terms of plot and progression, it probably is more closely related to traditional lovers triangle stories, where two friends both become infatuated with the new girl in town. Rather than the dark, haunting urban cityscape setting, this takes place entirely in or around a road house saloon near the Canadian border. Although Ida Lupino’s sultry and cagey Lily Stevens comes close, there really is no traditional femme fatale to manipulate the fighting men into their flap. And until the battle over the love interest, there is no central crime or shady activity taking place, no career criminals or unending scheming. Still, all of the uniformly outstanding lead performances contain noirish elements and the cinematography from veteran Joseph LaShelle manages to make the rural setting of Jefty’s Road House as mysterious as any city street.

Things center on Pete Morgan (Cornel Wilde), who manages the road house and bar owned by his good friend Jefty Robbins (Richard Widmark). Jefty provides the capital necessary to keep everything going, but it is Pete that truly runs the business. When Jefty returns from a trip to Chicago, he brings back with him a lounge singer he met in the city. Lily (Ida Lupino) might not have much of a voice, but she has stage presence that makes her an instant hit at the bar. Jefty is crazy about Lily, although his new employee begins to show more of an interest in Pete than in the man who brought her there from the city. With Jefty away on a hunting trip, Pete and Lily develop a close relationship and ultimately begin plotting to run away together and get married. When Jefty catches wind of the plot, he frames Pete for theft at the road house in order to foil the plans. To play the good guy, Jefty then has Pete released into his custody, but all of these machinations are not enough to stifle the love affair between Pete and Lily. When Jefty realizes that the two still aim to be together, he begins to violently unravel. 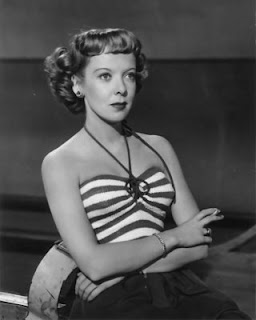 Any opportunity to watch Richard Widmark as a sociopath should be taken advantage of, and he does not disappoint here. But even the madness of Jefty is not the high point of the film. The catalyst to the success of the movie, and really the centerpiece of the entire story, is Ida Lupino’s Lily Stevens. In the entry for The Hitch-Hiker, I promised that there would be more Lupino in the countdown, and here she quiets any reservations one might have about considering her a top-flight actress. Lupino oozes sensuality, but in a different manner than someone like, say, Marilyn Monroe in Niagara. Lily is a tough, sarcastic personality that may know that she is beautiful, but does not intend to rely solely on attractiveness to make her way in the world. There is something equally alluring (if not more so) in watching her sit at the piano and deliver a gravel-voiced rendition of “One For My Baby” as in seeing the eye-popping Monroe lounging in a pink dress. The edgy, cynical personality of Lily also provides more character development than a character like Rose Loomis. While not a femme fatale, Lily is the impetus to the entire drama and Lupino is more than up to that task. The limits of the entire production become obvious as the film progresses, showing why the script had already been passed over by three previous directors before Jean Negulesco decided to make it. It is very much tied to the soundstage sets, with varying degrees of success. When set inside the road house, Joseph LaShelle and Negulesco do impressive work to make locales like a bowling alley or simple bar appear shadowy. The ventures to the border and outdoors are much more artificial.

This was the last noir that Negulesco ever made and it is certainly a solid way to end his foray into the field. It might not be his best, but it is still an entertaining, distinctive noir.
Posted by Dave at 12:05 AM