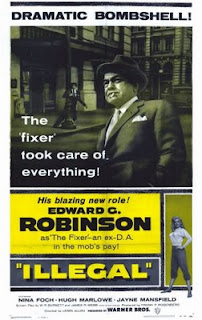 Yes, more Edward G. Robinson. I have very good reasons for ranking this one where I do, most of them centering on showcasing the varied talents of Mr. Robinson. Perhaps the epic fall, rise and consequent fall of attorney Victor Scott becomes too melodramatic in spots, but it gives the opportunity to show that Robinson can be equally impressive as both a hero and a heel. He does both in the same film here and it’s quite entertaining to watch. This is far from the epic or great ride that many films in this countdown remain, but I find it hard to believe that someone wouldn’t be able to get lost in this one for an afternoon or evening. Is it forgettable afterward? Maybe for some, but it’s the kind of pulpy yarn that I’m a sucker for. 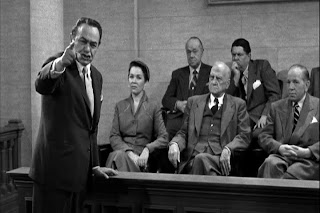 Robinson is District Attorney Victor Scott, an unbeatable prosecutor who always convicts his man. His perfect record is blemished, however, when a man that he convicted and sent to the electric chair is proven to have been innocent. Unable to live with the guilt, Scott becomes a hopeless drunk and completely loses the life he built for himself. The only person to stick by his side is his former assistant and surrogate daughter Ellen Miles (Nina Foch), who does her best to take care of the ailing man. Things turn for Scott after his own run in with the law – while waiting to appear before a judge, he gives some legal advice to a fellow inmate. He then realizes that he has the legal acumen to make a living as a defense attorney. A string of successes brings him to the attention of local crime boss Frank Garland (Albert Dekker), and Scott is slowly sucked into the underworld that Garland controls. Becoming house counsel to the crime lord, Scott becomes increasingly enamored by the money and power the job entails. But when Garland’s organization and planning begin to threaten the freedom of his beloved Ellen, Scott sees that he is going to have to find a way out of Garland’s grasp.

There are other principals that should at least be acknowledged – the always entertaining Albert Dekker is very good as the smug crime boss and Jayne Mansfield makes her film debut as a Garland gun moll. Nina Foch and Hugh Marlowe are solid as Scott’s dependable aides at the District Attorney’s office. Lewis Allen’s direction is honestly rather pedestrian, although the sequence with people scrambling to stop the execution of the innocent man is worthy of praise. There is nothing particularly memorable about the cinematography. The great Max Steiner contributes the score, but even that isn't unforgettable. Through it all, it’s Robinson that carries it for me. As I said earlier, it is interesting to see the two sides to Robinson’s on-screen personas within the same film. The man who became famous playing the callous Rico Bandello shows himself to be every bit as sleazy as Victor Scott the defense attorney. Yet, you also the get the do-gooder, looking for the truth Robinson exhibited in classics like Double Indemnity. Illegal came at a time when Robinson was still trying to recover his reputation after testifying before the House Un-American Activities Committee in the early 1950s and reluctantly giving names of communist sympathizers. Although it saved him from significant trouble with HUAC, it meant that few in Hollywood was quick to pass on prime parts to him as they had in the past. This meant that he took leads in a number of lower-budget crime films and this is the best of his pre-The Ten Commandments work. 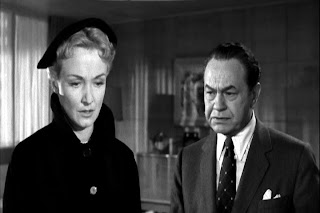 Thanks to the wonderful Warner Brothers Film Noir Collection Vol. 4, Illegal is now easy to get hold of and watch. I’m under no illusion that everyone will like it as much as I do. But it’s one any fan of Robinson needs to see, if for no other reason than to be reminded how long he remained a great actor.
Posted by Dave at 12:05 AM