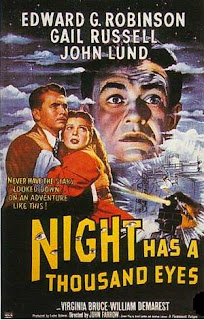 - “I had become a reverse zombie… the world was dead and I was living.”

The second film in the countdown to be based on a Cornell Woolrich, and this one is just as pulpy or over-the-top as the first entry (Phantom Lady). It might be so outrageous as to turn some viewers off. The tale follows the travails of John Triton (Edward G. Robinson), the man billed as “The Mental Wizard” who tours the country putting on vaudeville shows. In these shows, he and his partners, consisting of his fiancée Jenny (Virginia Bruce) and friend Whitney Courtland (Jerome Cowan), put on mind-reading shows to make ends meet. However, during one of the performances, Triton has a vision of an audience member’s son being killed in a fire. He quickly instructs the woman to get home immediately, and it turns out that had he not had the vision the boy would have perished in a fire. Triton continues to have premonitions in the weeks to come, which he and his partners are able to parlay into successful business investments. He becomes badly shaken by these visions, however, when he has a premonition of Jenny dying in childbirth. Believing this to be an accurate prediction, Triton decides that the only way to stop it from coming true is to leave Jenny and keep her from bearing children.

Triton thus abandons the act, completely cutting off ties from the two longtime friends. Whitney has become wealthy due to business tips from Triton’s premonitions, and after Triton’s unexpected exit he marries Jenny. Unfortunately for the newlyweds, Triton’s vision comes true in giving birth to their daughter Jean (Gail Russell). Still, Triton is too frightened to contact the family, although he lives near them in Los Angeles. Instead, he continues having his deadly visions and keeps them to himself. This all changes when he has a vision of Whitney’s death, which comes true. He decides to end his self-imposed exile in order to try and forestall his next ghastly dream – the death of Whitney’s daughter Jean. 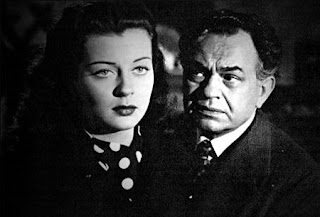 Sound too pulpy? Too outrageous to be taken seriously? In most cases, it probably would be. There is definitely a camp quality to some of it. And based on the description, it might not even qualify as a noir according to a traditional definition – just reading what I wrote as a summary sounds like a film closer to a Val Lewton horror film than a film noir. So why do I include it in a countdown of film noir? And more importantly, why do I rank it ahead of some other noir classics? I usually don’t quote others in my write-ups and reviews, but well-respected film noir scholar Eddie Muller summed it up best in his book Art of Noir when addressing this film:

“No film more faithfully captured Woolrich's sense of doomed predestination than Night Has a Thousand Eyes.”

Doom hangs over everything that happens. Almost all of Triton’s visions involve some type of death or injury. So at no point does the viewer expect anything less than tragedy. The helplessness of Triton’s dilemma is continually driven home, as he is a man who envisions horrific events but seems powerless to stop them from happening. This mood is aided by the creepy score of Victor Young and the cinematography from the always dependable John Seitz. But in the end, I have to credit the story that I earlier described as “over-the-top” and the way that John Farrow directs it. Farrow plays it completely straight, depicting all of Triton’s visions and predictions as being credible. There really is never any gray area – the story is filmed as if everything that Triton is claiming is absolutely true. Thus, rather than allowing the viewer to wonder whether Triton is genuine or simply a huckster, the focus is instead on the fact that he is condemned to a life of envisioning tragedies that he is incapable of preventing. 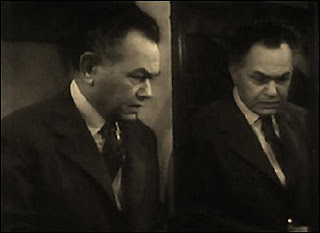 This is a little seen film that is definitely worth seeking out. Perhaps the camp elements will be not be so easily brushed aside by everyone, but I find it to be a wonderfully undervalued noir.
Posted by Dave at 12:05 AM