The countdown now hits Poverty Row with a release from the B-movie specialists at Eagle-Lion Films. It is also can be argued that He Walked By Night marks the first appearance in this countdown by renowned noir and western director Anthony Mann. Although Alfred L. Werker is the director of credit here, and Mann is not officially given recognition for any particular role, it is commonly reported that Mann was ultimately brought in to take over the film after the project was started under Werker’s control. Almost all classic movie guides and books on the history of noir repeat the assertion Mann was the true guiding force. I am not personally knowledgeable enough to point out precisely which sections are the work of Werker and which are Mann's. Looking at other work from around this period, though, makes it obvious that Anthony Mann played a significant role. 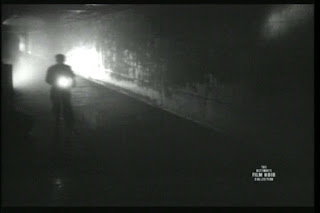 I say this because the focus on minute police procedural details and the showcasing of what at the time would have been cutting edge law enforcement technology is similar to Mann’s 1947 T-Men. The semi-documentary police narrative used here is very similar to that superior film, leading one to reasonably conclude that Mann must have been the hand behind both. This theory is also lent credence by knowing how well that Mann and longtime collaborator John Alton worked together. They had already teamed up for T-Men and Raw Deal (also released in 1948), resulting in films that are today still esteemed as prototypes of the “film noir look.” Alton shines in all three of the films mentioned here, but as good as his work in the two Mann-credited films, I think a strong case can be made the he is just as good, if not better, in He Walked By Night. Without question, it is Alton’s photography that is the highlight of the entire movie. The most celebrated sequence of the entire film is the climactic chase through the sewers of Los Angeles. Alton’s use of contrast and shadows was never better than in these scenes. And one has to wonder, if this sequence had any influence on the more well-known chase through drains that Carol Reed used a year later in The Third Man?

The deficiencies of the film are significant though, as character development is almost nonexistent. Richard Basehart is Ray Morgan, a thief who specializes in burglarizing high-tech electronic equipment. When a policeman witnesses him trying to break into an electronics store, Morgan turns his gun on the officer and kills him. This sets off a massive manhunt, leading to the police working to lay a trap for the unknown burglar they are hunting. The way that the story is told, focusing on the progress of the police investigation, means that we never get to really know any of the principles – be it the killer or the officers chasing him. The cat-and-mouse game remains tense the entire way through, however, which makes you forget about such flaws while watching it. 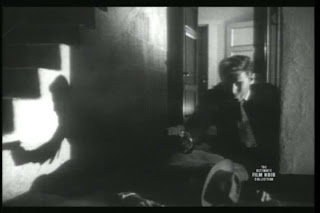 Beyond the qualities of the movie itself, He Walked By Night was also hugely influential in what it spawned. Jack Webb played a minor role as a lab technician in this film, but was inspired by the story to create the hugely popular Dragnet series. Perhaps that is the greatest legacy of the entire project, but this remains a film that is valuable in its own right. You might not get to intimately know the characters, but the story is told so well that at the very least you become interested in seeing what happens to them.
Posted by Dave at 12:05 AM