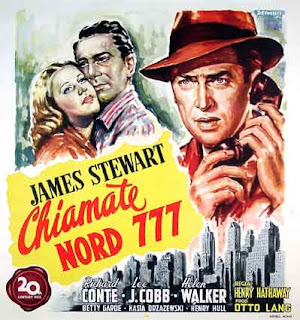 - “That's the trouble with being innocent… you don't know what really happened.”

After venturing to postwar Tokyo yesterday, the countdown returns to the traditional urban settings of noir crime dramas. Although, we do so with a movie that some will argue is not truly a film noir. There is no femme fatale or the expected flawed central character scrambling to self-created obstacles. I stand by the contention that this is definitely a noir, possibly the preeminent example of the “newspaper noir” subset that I have seen, and that the cynicism that pervades the best noirs is displayed here, it is just that it is seen in different places.

Call Northside 777 is loosely based on the true story of a skeptical Chicago reporter that worked to prove the innocence of a man convicted of murdering a police officer. The reporter, P.J. McNeal (based on real-life reporter James P. McGuire), is portrayed by the incomparable Jimmy Stewart, an excellent casting choice. When you see Jimmy Stewart, you know that the character is someone that will fight for the “good side” all the way to the end. In this tale, he is assigned to the story after his newspaper superiors come across a classified ad taken out by an aging woman (Kasia Orzazewski) that offers $5,000 to anyone that can provide evidence to exonerate her convicted son. Frank Wiecek (Richard Conte) was picked out of a lineup by a witness to a grocery store robbery (Betty Garde) and sentenced to life imprisonment. At the time of his meeting with McNeal, Frank had already served eleven years. Disbelieving at first, McNeal gradually comes to believe that Wiecek’s professions of innocence are the truth. The newspaper then picks up the story as a crusade to free an innocent man, with McNeal leading the charge. When the paper bales on the campaign, McNeal refuses to give up and continues the search throughout the city of Chicago. 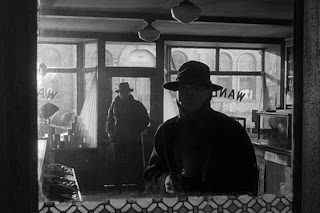 It is this trip through 1940s Chicago and the Polish neighborhoods of the Wiecek family and other first and second generation immigrants that add color to a familiar storyline. The tight-knit quality of these communities comes through strongly as McNeal navigates through the tenements, bars, and back allies of the area. The storytelling is done in documentary style, relying heavily on the nature of the work of reporters. The camera simply follows McNeal as he pounds the pavement, chasing down every possible lead, interviewing personalities as he finds them, and continually pouring over stock files and photos, hoping to unearth a detail that had previously been overlooked. 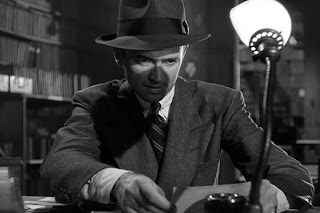 The skepticism is found here in the realization that almost everyone that McNeal encounters is at least somewhat cautious in their responses. Whether true or not, it appears to McNeal – and, by extension, the viewer – that people are being guarded in everything that they do. People are not necessarily downright “dirty” or deceptive, but they are certainly reluctant to admit wrongdoing. So we see things like the police believing that justice has been served when Wiecek is originally convicted, but then becoming unwilling to admit to wrongdoing or assist McNeal in his investigation when evidence begins to turn up showing that they may have jailed the wrong man. Similarly, it is never suggested that Wanda Skutnik maliciously intended to identify an innocent man. The procedure used by the police was flawed, allowing Skutnik’s faulty identification. But her obstinacy in admitting her mistake means that the innocent man will continue to sit in prison. And so we actually do see the dynamic of a single character fighting to overcome seemingly insurmountable obstacles. Perhaps they do not arise out of his flawed nature, but they are there all the same.
Posted by Dave at 12:05 AM