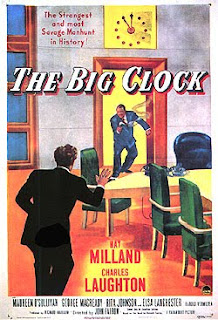 - “He doesn't want to let his left hand know whose pocket the right one is picking.”

Among those that have seen it, I’m guessing that they rank this one a bit higher than I do here. It is certainly an engaging mystery. The central storyline, of ace reporter George Stroud using his team of investigators to examine a murder, continually turning up evidence that points the finger at Stroud himself, is highly entertaining. It is due to minor subplots and some of the acting witnessed along the way that this convoluted murder mystery is not inching toward the top 50 or 60.

Ray Milland stars as George Stroud, the editor of Crimeways Magazine, a publication following crime throughout the nation that is renowned for the ability of its staff to track down fugitive criminals. Crimeways is owned by publishing tycoon Earl Janoth (Charles Laughton), a tyrannical millionaire who demands absolute subservience from the employees at his many publications. When George is on the verge of leaving for a much-awaited vacation with his wife (Maureen O’Sullivan), Janoth insists that he delay the vacation even longer to stay at the office and work one more story. When George quits the magazine in response to Janoth’s bullying tactics, he goes to a local bar for a drink. There, he meets a woman named Pauline (Rita Johnson) and spends the evening with her, standing his wife up at the train station. The next morning, Pauline shockingly turns up murdered. George realizes that he could easily be identified as having been with Pauline the night before her death. When Janoth calls to get him to return and work the case, he decides to return to Crimeways, in order to throw his staff off of his trail and try to catch the true murderer before he is suspected. 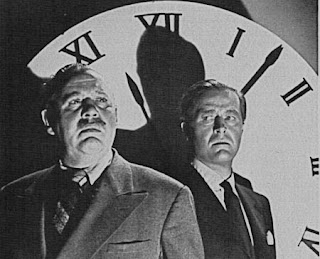 Sound convoluted? It is, and this is part of what lends it such a noir feel. Stylistically, it does not boast the usual abundance of dramatic lighting and abstract compositional elements. But I think it most certainly qualifies. The story is told in flashback, from the point of view of George as he is hiding in a dark corridor and recounting his harrowing situation. That most classic of noir scenarios – a regular guy being thrust into horrible predicaments by chance or an innocuous meeting – is played out as George slowly begins to realize that Janoth is manipulating evidence along the way. I still consider Laughton to be one of the premier actors in the history of cinema and he plays the megalomaniac publisher very well. Some of the mannerisms adopted for the role are a bit over the top – such as always rubbing his mustache – and add a cheese-factor to some scenes. On the whole, though, performances are generally solid, although none are exactly standouts.

The most impressive aspect of the film to me is the overall design and look of the publishing industry. And by look, I’m not referring strictly to cinematography, as is normally my focus. I mean the entire set design and atmosphere created in the Janoth building, particularly the massive Janoth clock on the front of the headquarters, from which the movie derives its title, and where George is hidden as he recounts the story. I love how Farrow uses a simple elevator ride to introduce various magazines in the Janoth publishing empire, showing how the man has a publication to cover almost any topic imaginable. It creates a unique impression of the cutthroat, ultra-competitive world of publishing, painting leaders in the field as shady characters.

It is also worth nothing that the script by Jonathan Latimer is also able to incorporate a bit of humor into the murder mystery. Most of this comes from Elsa Lanchester’s Louise Patterson character, the eccentric artist. Lanchester was also at this time the real-life wife of Charles Laughton.
Posted by Dave at 12:05 AM