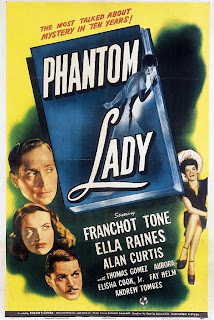 It is amazing to consider that although he never actually penned a screenplay himself, the writer Cornell Woolrich remains one of the towering figures of film noir – and really of noir in general, including pulp novels and mysteries. The list of classic films based on Woolrich short stories or novels is staggering and a number of them will be featured in this noir countdown. In the case of Phantom Lady, which Woolrich penned under the pseudonym William Irish, it is truly a meeting of noir masters, as the legendary writer’s source material is directed by German refugee Robert Siodmak. Siodmak would go on to become one of the most recognizable artists in the genre, but with Phantom Lady he made his first foray into noir while finding himself in the new Hollywood setting. And find his way he did, transforming a story with significant plot obstacles and establishing a stylistic template that helped define the look of future noirs.

The story itself is over the top and, in all honesty, pulpy to the point of being barely believable. It is a familiar setup, as Scott Henderson (Alan Curtis), a highly successful businessman, leaves home after a fight with his wife and finds himself alone in a bar with a just one other patron – a well-dressed, beautiful young lady (Ann Terry). Not wanting to become entangled in a relationship, the two agree to remain anonymous and not so much as reveal their names to each other. Returning home, Scott discovers that his wife has been strangled. Admitting to the fight earlier in the evening, Scott quickly becomes the prime suspect. His alibi to prove his innocence is that he spent the night with the phantom lady, but not knowing so much as her name he is unable to produce her. Retracing his footsteps, every potential witness that can validate his presence at the bar, night show and other stops claim to have never seen Scott with the mysterious woman. Either the entire affair is a figment of Scott’s imagination or someone has gotten to the witnesses. Charged with the murder, he is convicted and scheduled for execution. His loyal secretary Carol “Kansas” Richman (Ella Raines), who has never believed the accusations, works feverishly to prove his innocence. With the help of a detective, she scrambles to try and find the phantom lady before it is too late.

Siodmak has a number of noirs to his credit that I think are absolute, undisputed masterpieces. This is not one of them – the story is just too limiting. It is, however, an interesting experience precisely because Siodmak is in the director’s chair. Siodmak signed a seven-year contract with Universal Studios when he came to Hollywood in 1943 and Phantom Lady was his third film in the United States. And this would his first box office success, giving his career a significant jumpstart. Siodmak came to the States well-schooled in the German Expressionist style of filmmaking, and with another German expatriate Fritz Lang, would help define the overall look of the noir era. 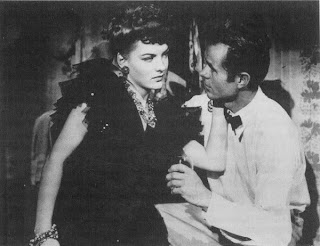 All of the noir staples are in evidence here. The sharp, striking contrast between light and dark, to the point that characters are completely silhouetted and their movements can be followed by nothing but shadows. The dim, menacing New York City streets, exuding the impression that potential evil waits at every street corner. Jazz music heard playing throughout. These are elements that would become stock tools of other noir directors, but here Siodmak is like an alchemist trying to find the correct formula. Teaming with cinematographer Woody Bredell – who he would also work with on 1946’s The Killers – Siodmak uses lighting and camera positioning to manufacture very tense, and not to mention sexy, scenes. One in particular, as Kansas tries to seduce a drummer (Elisha Cook, Jr.) in order to get information, is as steamy as I can imagine the Hays Code allowing to slip through.

Clunky dialogue and plot holes aside, this is a noir that needs to be seen by all enthusiasts. Not only is it visually interesting, but it allows you to see the first full-fledged noir from a director who would shortly thereafter emerge as one of the preeminent practitioners. It is Siodmak’s show throughout, and when viewed as a warm-up for the great things that he and Woody Bredell would do together two years later, it is also an intriguing historical document.
Posted by Dave at 12:05 AM