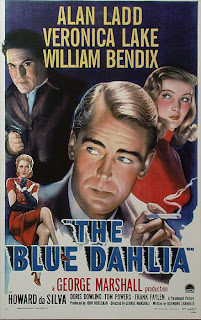 To this day, Alan Ladd and Veronica Lake remain one of the most celebrated pairings in Hollywood history. They made four films together and have been inextricably linked ever since. Whenever I hear one name, I instantly think of the other, and my guess is that many others reading this article have a similar reaction. Although I find their work to be a tad overrated, the noirs that they made together are historically significant, with films like 1941’s This Gun For Hire remaining a seminal part of the noir canon. Many point to that film as one of the first true noirs. The next year’s The Glass Key is also well-regarded and another that I too enjoy. The Blue Dahlia, also enjoys a favorable reputation, but is generally viewed as being inferior to other Ladd-Lake efforts. For me, though, it remains my favorite film that the couple made, although not because of the efforts of the two headliners. 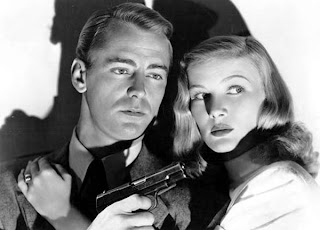 Two other key elements fascinate. The first is that this is the only original screenplay ever written by legendary pulp author Raymond Chandler makes it essential viewing. His shadow already loomed large over all of film noir, with a number of his classic novels and stories being adapted for the screen in previous years. Chandler had also already been involved in screenwriting by this point, having collaborated with Billy Wilder in penning the screenplay for an adaptation of James N. Cain’s Double Indemnity. For this film, he creates a story of post-war malaise, following the reentry into society by returning veterans. Johnny Morrison (Alan Ladd), a returning war hero, comes home to Los Angeles with two close friends, Buzz Wancheck (William Bendix) and George Copeland (Hugh Beaumont). Life does not simply return to normal for the men – Buzz now has a steel plate in his head that prompts fits of rage and amnesia, while Johnny returns to his home to find his wife Helen (Doris Dowling) being intimate with Blue Dahlia nightclub owner Eddie Harwood (Howard Da Silva). Leaving his cheating wife, Johnny meets the beautiful Joyce (Veronica Lake) and joins her at a Malibu diner. While there, he learns that his wife has been murdered. Realizing that he is going to be the prime suspect, Johnny returns to L.A. and begins his own search for the true killer.

It is far from Chandler’s best story or script, but I don’t think it is as weak as I’ve seen it described. The classic biting dialog remains on display. Still, it is not nearly as dark or foreboding as his other classic noirs, and is probably closer thematically to a film of post-war disillusionment and malaise like The Best Years of Our Lives than to hardboiled noir. Legend has it that Chandler himself pushed for a darker tone, particularly for the conclusion, wanting one of the returning veterans to be the killer. The implication would be that the soldiers had become completely desensitized to violence. The studio objected, forcing Chandler to instead solve the mystery in more socially-acceptable fashion. It would have certainly added to the overall “noir feel,” but since my definition is wide anyway, it doesn’t affect its status in my mind. 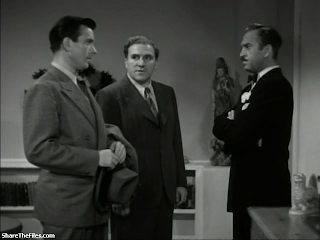 The performance to remember comes not from Ladd or Lake, but instead from the always-dependable William Bendix. Bendix is one of this classic era character actors that always shines in whatever screen time his character receives. Buzz in particular is the character best-written by Chandler and Bendix is perfect in delivering the wisecracks and zingers. He actually adds a bit of comedy to the story in parts, although his amnesiac fits are certainly not intended to be humorous. I can agree with the assessment that the direction is rather average and there is nothing particularly catching about the cinematography. But it remains a film that I continue to enjoy. Perhaps it is all a bit contrived, but there remains something charming about it for me.
Posted by Dave at 12:05 AM