The update on the noir countdown is pretty simple: everything is ready to roll for the start on Monday. Not a whole lot more needs to be said, but hopefully everyone is looking forward to it.

I mainly wanted to have a post to be use as an excuse to post my own Best of the 2000s list now that the decade has closed. I originally intended to hold off on posting one, and save it for the Wonders in the Dark poll, but I know that my preferences will have changed by then anyway. There are also a number of films from the decade that I still need to see for the first time (like The White Ribbon, which I've been meaning to get to for weeks, and many more) and those that I need to revisit (such as Inglorious Basterds). So I'm not exactly giving things away by posting a list now. Anyway, here goes with a Top 20, based on nothing but personal preference at this moment, along with some quick blurbs for each film:

1. The New World (Terrence Malick, 2005): I've already written about this one at length in the Year's Best Countdown, so I'll refer any interested to that essay, which I thought was my best of the entire series. I will add, though, that not only do I consider this the best of the last decade, but among the best of any decade.

2. The Assassination of Jesse James by the Coward Robert Ford (Andrew Dominik, 2007): I suppose that it's not an incredible compliment to call this the best western since Eastwood's Unforgiven. After all, the competition wasn't spectacular during that span of fifteen years. What is a great compliment is saying that I think that The Assassination of Jesse James is at the same level as Unforgiven and one of the best westerns that I have ever seen.

3. Mulholland Dr. (David Lynch, 2001): I will always cherish the memory of watching this for the first time. It still remains fascinating and is far and away my favorite thing that David Lynch has ever done.

4. Lost in Translation (Sofia Coppola, 2003): It still amazes me to think that since the 1979 release of Apocalypse Now the best film involving anyone in the Coppola family would come from the one who was best known for blowing the role of Michael Corleone's daughter. For me, Bill Murray has never been better.

5. Zodiac (David Fincher, 2007): I have never been a huge David Fincher fan. I like a lot of his films, but until this, I never loved one. I already knew the ending, I knew a lot of the details that are highlighted in the investigation, and yet everything remained unbelievably thrilling and intense. Great direction from Fincher, great use of pop music of the era, and just an all-around well-made mystery. I would argue this to be one of the most underrated movies of the decade -- many acknowledge that it's a good film, but I don't see many ranking it as highly as I do.

6. Downfall (Oliver Hirschbiegel, 2004): This one has continued to get better on successive viewings. Originally, it was being captivated solely by the performance of Bruno Ganz as Hitler, but each time I realize that there is so many fascinating elements to the story. It's a grueling, depressing tale, creating conflicts as to how one should feel about the characters.

7. Fellowship of the Ring (Peter Jackson, 2001): I included only one Lord of the Rings films in this Top 20, because in all honesty I have trouble separating them. I'm not exactly an advocate of viewing them as one movie, but I seem to respond just about equally to each of them. But the best overall experience I had from them was seeing Fellowship of the Ring. A great way to start a classic trilogy. 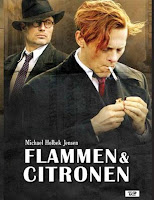 8. Flame & Citron (Ole Christian Madsen, 2008): A movie that more people need to see. It is a hybrid WWII thriller and film noir, with enough psychological nuance to keep people thinking and action to keep them exhilarated.

9. The Lives of Others (Florian Henckel von Donnerskmarck, 2006): I'll admit that on repeat viewings, it has become obvious to me that the ending could have been made just a bit more understated and been just as, if not more, effective. Still, a wonderful slow-moving thriller that has moments of incredible white-knuckle tension.

10. United 93 (Paul Greengrass, 2006): When the movie world was buzzing and fawning over Scorsese's The Departed, I remained confused why there wasn't even greater recognition for this Greengrass film. I can understand the initial reticence to see a movie that could have been a cashing-in on a national tragedy. It is far, far from that. What sticks with me most is the feeling of immediacy to everything that is happening. The events of that day are condensed down to around two hours, but it feels like it is all happening in real-time.

11. There Will Be Blood (Paul Thomas Anderson, 2007): I earlier admitted that I liked everything David Fincher had done prior to 2007, but didn't love anything of his until Zodiac. With PTA, I really didn't like much of anything that he had done until his release this year. I still don't get the appeal of many of his more critically-acclaimed releases. But this one more than lived up to the hype.

12. City of God (Fernando Meirelles and Katia Lund, 2002): An interesting, unique crime film depicting an environment that those in the United States (if not elsewhere around the world) know very little about. Stylish yet gritty, with excellent cinematography.

13. Mystic River (Clint Eastwood, 2003): This one is draining to watch, a depressing tale that looks as dark as it feels. I personally consider Eastwood to be among the finest American directors and, in my opinion, this is the best film that he has made since Unforgiven. 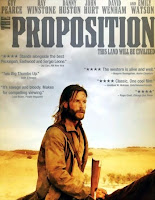 14. The Proposition (John Hillcoat, 2005): Westerns set in Australia? Who knew... certainly not me. The composition of the film is what is most interesting. It jumps back and forth from brutal to lyrical, from psychedelic to brutally realistic. Another great western from this decade, but not one that everyone has seen. Perhaps the publicity that Hillcoat received with the release of The Road will inspire more people to go back and see this one for the first time (or a second, or third...)

15. Up (Pete Docter and Bob Peterson, 2009): This is one of only a few Pixar films that I have seen. I tend to have absolutely no interest in animation of any kind, so I was more shocked than anyone when I loved this movie. That opening fifteen minute silent sequence is spectacular. The movie could have ended after that and I still would have been satisfied.

16. The Aviator (Martin Scorsese, 2004): Marty finally got his Oscar in 2006 for The Departed, but in my opinion this was his best film of the decade. The production is different from the usual Scorsese film, as he discarded the usual gritty feel of his films and instead went with big, opulent designs. It fits the personality of Howard Hughes and shows that Scorsese is far more than a one-trick pony.

17. Road to Perdition (Sam Mendes, 2002): Perhaps this is here as a result of my recent re-watching and remembering how spectacular the cinematography was. I always knew that, but this time the film was more enjoyable as I no longer felt that the story dragged down the rest of the production. Still, the most impressive feat remains Conrad Hall's dazzling photography. American Beauty is the most obvious choice for the best of Sam Mendes, but I'll continue to prefer Road to Perdition.

18. Crouching Tiger, Hidden Dragon (Ang Lee, 2000): In my review for the Year's Best Countdown, I described the fight scenes in this film as reminding me of a well-choreographed dance scene in a classic musical. They're that impressive. And the story, with the perfect mixture of mysticism and exotic (to my American-centric way of life) locales. This is another one that never expected to like as much as I do.

19. Almost Famous (Cameron Crowe, 2000): Anyone who knows my passion for rock n' roll will instantly know why I adore this film. My favorite bands are groups like The Rolling Stones, The Beatles, Led Zeppelin and others, so I have always felt like someone who was born a few generations too late. That's the appeal of this film for me -- it's a story I wish that I had been right in the middle of.

20. The Reader (Stephen Daldry, 2008): I had read wildly differing reviews going into this one, ranging from masterpiece to mere fluff. I lean more toward masterpiece, even if I'll stop a bit short of declaring it as such. A lot of times, "twists" such as the critical detail used here, seem like cheap tricks. Here, I think it's used very well. Kate Winslet certainly deserved her Oscar.
Posted by Dave at 9:53 PM