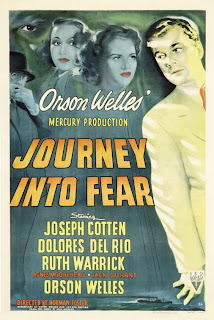 More controversy over the credits to a film noir! Much like the previously-reviewed He Walked By Night, Journey Into Fear has long been the subject of discussion concerning who should truly receive credit for directing. It remains officially credited to veteran Norman Foster, a somewhat forgotten figure that I personally find to be an outstanding director. But the shadow of Orson Welles looms large in the entire production – he appears to have been involved at every stage. He worked with Joseph Cotten to develop the adaptation of Eric Ambler’s novel. His Mercury company produced the film. He contributed his services as an actor. And, for many years, it has been assumed that he, and not Norman Foster, was the one directing.

The most obvious reason for why such rumors have persisted for well over sixty years is that it has the look and feel of an Orson Welles film. According to the textbook definition, it is only marginally a film noir. Rather than the traditional urban, inner city setting of most noirs, Journey Into Fear instead takes place abroad during the height of World War II. Howard Graham (Joseph Cotten) is an engineer for the United States Navy who is traveling with his wife (Ruth Warrick) and returning from a conference in Istanbul. Fellow employees persuade Graham to spend a night with them at a local nightclub, and in the process Graham’s eye is caught by dancer Josette Martel (Dolores del Rio). When an attempt on Graham’s life fails, he is ushered out of the club and into the hands of Turkish authorities. Realizing that Graham possesses information that can assist the Turkish anti-Nazi war effort, Col. Haki (Orson Welles) warns the American to get out of the country. He offers to protect him, putting him aboard a steamship with a number of shady characters. 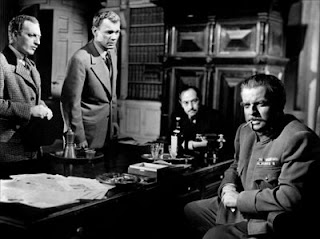 A lot of the visuals look like pure Orson Welles. There are his typically unique camera angles, showing his ability to heighten the impact or tension of a scene by something as simple as camera placement. Knowing the work that Welles would go on to direct in the years to come, the style of this film is in the same vein as later works like The Lady From Shanghai. Welles himself would add to the controversy over who was the true director. In his book with Peter Bogdanovich,This is Orson Welles, Welles seemed to make it clear that he was only an actor and that Foster was in sole control as director. This would appear to end any possible interpretation, but doubts still linger. In the past, Welles had also remarked that production was so hectic that who directed each scene was determined simply by whoever was closest to the camera. My guess is this second explanation is nearest the truth. I don’t think that Norman Foster was incapable of doing work like this on his own – as I said, I think that he was a fine director in his own right, particularly of noirs and he will appear more later in this countdown. But so much of the film bears the hallmark of Welles, that it is hard to believe that he was not involved in the direction.

Journey Into Fear also bears the unfortunate trait of an Orson Welles film of being completely butchered by studio heads. The original running time came in at right around 90 minutes, but the brass at RKO chopped it down to 69 minutes. Some scenes were deemed too sexual in nature, in addition to censors taking offense to what they perceived as far too political for release. Restoration efforts in later years would restore a fraction of the lost footage, but one still wonders what the hour and a half version would have been like. And I still personally marvel at how anything with Welles attached to it was eventually mangled by studio brass. 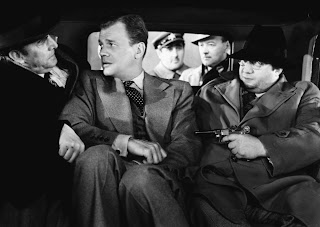 This is not a conventional film noir. For whatever reason, the story never feels anywhere near as dark as the visuals would lead you to believe it should be. There is a foreboding atmosphere on the boat, but it’s not quite as sinister as the experience of some other, darker noirs. Part of this can be attributed to the carefree nature of Joseph Cotten’s narration. But the main reason is just the quirkiness of everything. This is a genuinely bizarre film, and one that will alienate many viewers and have them scratching their heads as to why it made this countdown. At its core, it might be nothing but a simple, entertaining spy thriller. If you can embrace the offbeat, experimental nature of it all, it can be quite a fun ride.
Posted by Dave at 12:05 AM