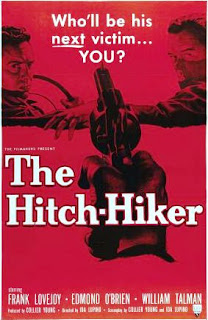 Ida Lupino is a unique figure among Hollywood personalities. She is rightly acknowledged as an outstanding actress, leading to her persona during the 1930s and 40s as the B-movie equivalent of Bette Davis. She is a prominent figure in a number of outstanding film noirs – ones that will be featured later in this countdown – with versatility to play vulnerable, compassionate characters or an unabashed temptress. But her greatest legacy remains her pioneering efforts as a female director. While by no means the first woman to become interested in directing, she was unique in film noir, a type of film normally identified with hardened, masculine characters and gritty storylines. Not only was Lupino undaunted by such characteristics, but as John Greco points out in his excellent review of this film, she proved herself to be every bit the equal of tough directors like her mentor Raoul Walsh in handling the violent themes seen in The Hitch-Hiker. 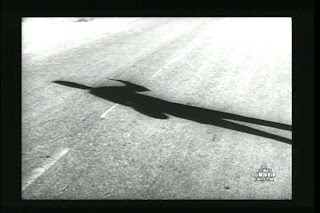 It is a simple story, told in simple fashion, but the straightforwardness of the production is what allows the movie to be so tense. A good majority of the film is actually little more than two weekend fishermen, Roy Collins (Edmond O’Brien) and Gilbert Bowen (Frank Lovejoy), driving their car while the crazed hitchhiker they graciously picked up, Emmett Meyers (William Talman), sits in the back seat intimidating them into compliance. Teamed with legendary cinematographer Nicholas Musuraca, Lupino’s decision to keep key sequences at close quarters creates a sinister feeling that keeps what would otherwise be mundane situations quite interesting. The scenes of the trio driving, Roy and Gilbert nervously sitting in the front, and the demented Meyers shrouded in shadows in the backseat are akin to something you would see in a horror movie of the era. With the exception of John Alton, I don’t know that any directors of photography of this era were more skilled than Musuraca at using shadows to such great effect. The images of the fisherman staring straight through the windshield, nervous about their trip, and the killer peering through the dark to keep them in line are the most memorable of the entire film. 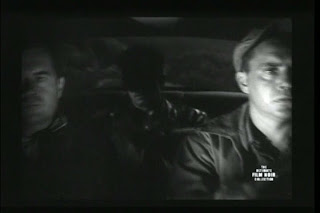 O’Brien is a veteran noir actor, underappreciated by the public at large, but well known to all that enjoy films of the era. But the true virtuoso performance of this film comes from William Talman. Emmett Meyers has affectations that could come across as very camp or kitsch, so credit goes to Talman in having the ability to make Meyers a truly menacing character. Things like the inability to close one of his eyes, allowing him to keep his hostages guessing as to whether he is ever truly sleeping, might seem ludicrous to some. But when watching the film, after seeing the look that Talman is able to maintain, it gives one pause as to whether Roy and Gilbert should be attempting to make a run for it.

This film is routinely cited as being the first film noir directed by a woman. I have no way of verifying that, but to my mind that is an unnecessary descriptor. Lupino made The Hitch-Hiker with just as much grit, brutality, and cynicism as any male director could have. If not for losing a bit steam at the end, when things branch out from the close quarters of the car, this one would be much higher on the countdown. As it stands, it’s still an excellent noir thriller that has visual stylistics to give it the proper look.
Posted by Dave at 12:05 AM