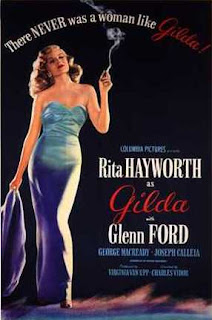 This won’t be the case for the older visitors of the blog (I kid, I kid!), but those that are closer to my own age can probably admit to first being exposed to this gem of 1940s Hollywood through another, more recent movie – The Shawshank Redemption. Before I ever had any idea about whom or what Gilda was, had the slightest idea about film noir, or had even heard of Glenn Ford, I knew about the most famous scene in this entire movie. I knew that Shawshank’s Red didn’t want to miss the part in the prison film screening where Rita Hayworth “does that shit with her hair.” The reaction that such a simple flip of her strawberry blond locks got from the prisoners always fascinated me. The sensuality of such a move might have been dulled over time – how can it not have been, with the amount of sexuality that is now so commonplace – but when I finally saw Gilda for the first time, I was equally as captivated by the screen presence of the stunning Rita Hayworth as were the fictional inmates of Shawshank State Prison. She is the focal point of all that happens. There are a number of interesting things going on in this film, but everything eventually returns to her. The title is no coincidence – it is all about Gilda, meaning all about Rita.

Stricter definitions of noir might exclude this one as well, but it is so well-established as being a part of any respectable noir library that I’m not even going to try and list its credentials. Every reputable film noir source that I have seen includes it, so whether the individual elements add up to a noir or not, it’s reached the point where it doesn’t even matter. Even if it doesn’t meet a definition – such as at Goodfellas visitor Tony D’Ambra’s Films Noir.net – the perception is that it is a classic noir. And I happen to think that the perception is correct. 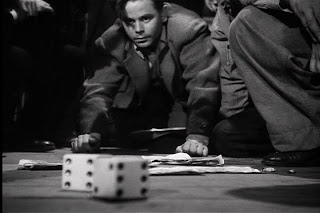 This is another noir set outside inner city United States, instead taking place in Buenos Aires. American gambler Johnny Farrell (Glenn Ford) is on the verge of being jumped for his winnings after a dockside dice game, when a stranger with a stiletto saves him. The stranger turns out to be Ballin Mundson (George Macready), a wealthy casino operator who invites Johnny to stop by his own establishment in the future. Johnny does just this, using his full bag of tricks to beat Mundson’s casino out of big money at the blackjack table. Rather than rough Johnny up, Mundson is convinced to hire Johnny as his right hand man in running the gambling operations. Things are going smoothly until Mundson returns from a vacation with his new wife, the dazzling Gilda (Rita Hayworth). Mundson is completely unaware of the fact, but it slowly begins to emerge that Johnny and Gilda have a history as former lovers, with the result that the two now loath each other. While the love triangle plays out, Mundson and his operations are imperiled by visiting Germans, whom Johnny notices Mundson pays off by rigging spins of the roulette wheel. With the Germans constantly dropping into the casino and investigators swarming around everyone, Johnny tries to navigate these various currents – made all the more difficult by Gilda’s unceasing machinations. 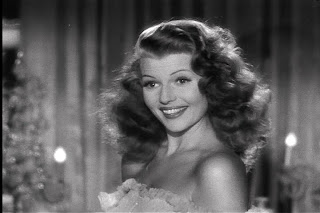 I have never been blown away by the acting chops of Glenn Ford, but he is quite good as Johnny Farrell. While this is not my favorite noir that Ford starred in (we’ll get to that eventually), this could be my favorite performance by him in a noir. The dynamic that is established in between Johnny, Gilda and Mundson is intriguing throughout. What makes it so interesting is that (at least in my case), you can never get a firm grasp on where everyone fits. The relationship between Johnny and Mundson has undeniable homoerotic overtones (nothing in your face, but it’s there), so is Gilda someone who is coming between them as they grow closer? Or is it perhaps that both men are so infatuated with Gilda that they are eventually driven apart? It could be that Gilda really is the ultimate femme fatale who just enjoys playing off two suitors against each other and watching the carnage that she creates. Gilda is obviously a selfish person, so it is hard not to see her as someone that is deliberately manipulating things. But at the same time, the thought always remains that rather than being jealous of each other, Johnny and Ballin are actually jealous of watching Gilda grow closer to the other friend. 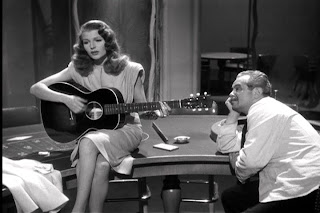 Even without trying to analyze the film at that level, it needs to be seen just to take in Rita Hayworth in all of her glory. When someone says “Rita Hayworth” or pictures the superstar, it’s probably Gilda that first comes to mind. It’s hard to get images of her from this film out of your head, whether it is that legendary introduction or her sitting on a card table in a nightclub playing the guitar and singing. Many working behind the camera shine as well, with future director Rudolph Maté contributing photography that is gorgeous. It's not as dark as other noirs, but the use of shadows in the nightclub interiors, and particularly the short time spent on the Buenos Aires docks, is wonderful. And don't overlook the musical contributions to the film, with Anita Ellis providing the voice to Hayworth's actions in memorable numbers like "Put the Blame on Mame."

Put simply, this is just a very entertaining noir.
Posted by Dave at 12:05 AM