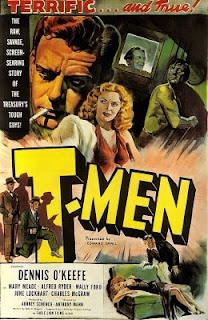 I understand that I’m likely taking another minority position here, but T-Men remains my favorite noir that the dynamic duo of Anthony Mann and cinematographer John Alton ever produced. Raw Deal looks spectacular, as I said in my review, quite possibly the quintessential low budget noir in terms of visuals. But T-Men is the one that I continually return to when I reach for a Mann noir. It is far from a perfect film – in fact, I have one serious issue with the entire production, which I might as well get to right up front. The narration is completely unnecessary, adding a cheesy element that unfortunately dates everything. It would have been even more successful if Mann had managed to shun some of the more conventional police procedural devices – narration and an introduction by Harry Anslinger – but even with such a major complaint, I have no problem labeling this one a masterpiece. The reason that I can do this is that the voice-overs are so superfluous, so detached from the narrative, that the movie works perfectly fine without them. They could be completely removed and nothing would be lost. So I choose to simply ignore them, appreciate the brilliance of the many other elements, and savor this film that put the Mann-Alton team on the map. 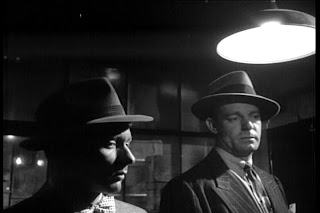 T-Men follows the subterranean journey of two Treasury agents who go deep undercover to bust a large-scale counterfeiting ring. Posing as longtime knockaround guys, O’Brien (Dennis O’Keefe) and Genaro (Alfred Ryder) get close to the powerful Vantucci mob in Detroit, using these connections to then move to Los Angeles and get close to the home of the counterfeiting operations. In L.A. they meet a semi-legitimate man known as the Schemer (Wallace Ford) who appears to be at the center of the ring. O’Brien and Genaro both take heat in trying to get close to group, being roughed up and interrogated by Vantucci hoods in order to make sure that they are not agents or stool pigeons. Both men hold up under the strain, which gets them even closer to the gang. Using fake plates and papers provided by the Treasury Department, O’Brien proves that the duo have the resources to be players. But the deeper that the two are pulled into the operation, the more murkier become. Slip-ups and unfortunate coincidences make it increasingly dangerous for the agents and ultimately lead them to deadly showdowns.

Like great undercover movies that have been made since, what T-Men does effectively is blur the line between agents and criminals. It is obvious that O’Brien and Genaro remain on right side of the law, but in order to survive in the underworld they are forced to adopt the outlook and actions of true hoods. This creates interesting scenarios where they are forced to act less as lawmen and more as the criminals they are pretending to be. Things that would have likely been unthinkable to them before they went undercover – spurning a wife, roughing people up, standing by and allowing a murder to take place because to do otherwise would lead to even more killing – are things that they have no choice but to do. The entire film really has a surprisingly vicious quality. Charles McGraw is brutal as the enforcer Moxie, and when he confronts Schemer in a Turkish bath the result is one of the most memorable assassinations in all of noir. 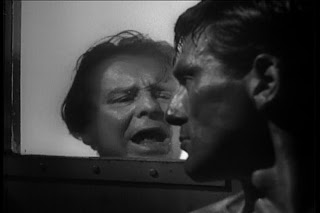 The storyline is the perfect fit for the styles of Mann and Alton. The deeper that O’Brien and Genaro are plunged into the underworld, the darker that Mann and Alton make their surroundings. Alton could do more with less light than anybody I have ever seen. Here and in Raw Deal, it looks like he walked on set with a basic lamp and household light bulb and used this as the only light source in either film. What makes this so impressive is how shrewd he was in placement of light, making the contrasts stark and the shadows downright menacing. Alton and Mann were also masters of camera placement, increasing tension in a scene simply by clever positioning. Just watch scenes like O’Brien trying to surreptitiously recover a counterfeiting plate from under a sink while a hood stands on the other side washing his hands. The camera sits at a low angle, staring directly at the sink, allowing the audience to watch both the frantic movements of O’Brien’s hands under the sink and the action taking place above it. Even more impressive to me is the scene in the Turkish bath, where Schemer’s death is filmed entirely through a port hole in the door.

I know that over the course of the countdown, some folks have remarked that voice-overs like those featured in T-Men are too much for them to take. For the most part, it’s not that I can’t take them, but I agree that they are usually completely unnecessary. I just hope that people can get past it in this case and appreciate what an outstanding movie lays under the voice-overs. It is a truly great film and an important one in the history of noir.
Posted by Dave at 12:05 AM