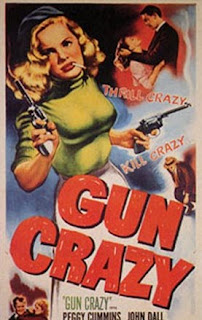 a.k.a.: Deadly is the Female

- "We go together, Annie. I don't know why... maybe like guns and ammunition go together."

That fact that Gun Crazy comes in at #48 only reiterates the glaringly obvious observation that I’ve pointed out a lot recently – it’s getting really, really hard to separate some of these films. From here on in, we’re dealing what I consider to be the cream of the crop of film noir. For me it, means sifting through longstanding and deserved classics and personal favorites that I feel deserve greater attention in a series like this. I might be repeating myself with this little preamble, but it’s just meant to emphasize the fact that from here on in we’re dealing with classics – if not universally recognized classics, then at least in the mind of this inveterate list-maker! Personal taste comes in huge now.

Based purely on reputation and stature in the history of noir, Gun Crazy would probably be a shoo-in for the Top 10. I remember when I first became interested in film – I mean really interested – and realized that I was being drawn to a type of movies called “film noir.” I came to noir (as I suspect many people have) through Bogart, seeing him in standards like The Maltese Falcon and The Big Sleep, but as I began to investigate essentials of the noir canon, one of the first recommendations I came across was for this B classic. Having attained a strong cult following, Gun Crazy has come to be regarded as one of the cornerstones of noir. And although I would obviously go on to become a noir junkie, I have to admit to not immediately responding to Gun Crazy in this way. No doubt, I enjoyed it, but I didn’t initially understand why it is so highly regarded. At the time, my only focus was on narrative and, I might be in the extreme minority in saying this, the narrative is not seamless. I’ve since come to appreciate it more than I originally did, but the main reason for my growing admiration of the film is the impressive craftsmanship of director and female star that elevate Gun Crazy far above its B-movie origins. 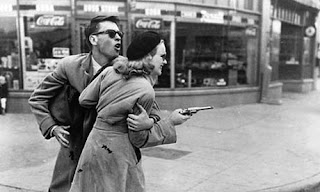 The story is familiar to everyone, even those that have never heard of the movie, as it has similarities to the Bonnie and Clyde legend. Bart Tare has been fascinated by guns since a very young age, when he was caught stealing a pistol from a local store. Sentenced to reform school, Bart (John Dall) returns to his hometown as a grown man, having served a stint in the army, and is still as obsessed with guns as he has always been. When he and his childhood friends visit a traveling carnival, Bart responds to a challenge from female performer Annie Laurie Starr (Peggy Cummins) and outshoots her. The two have an instant attraction, which only deepens when Bart joins the carnival as a performer. When the two are married and begin struggling to make ends meet after leaving the carnival, Laurie begins to use her seductive powers to convince Bart that the couple should put their marksmen skills to better use. She argues that if they pull off a few bank and payroll jobs they will have enough cash to live a life of luxury. Bart eventually agrees, only to keep Laurie from leaving him, but soon he is in far deeper than he ever imagined.

There is certainly cheese to be found in some of the details – the prologue that begins the film is downright corny and the constant hampering on “he would never shoot a living thing” angle can at times feel like being hit over the head with a mallet. But, even with the cheese factor, they are seeds that at least make sense when they come to fruition later in the film. And they come to fruition because of the powerhouse performance of Peggy Cummins as Laurie. Dall, for me, is a stand-in, and could have been swapped out for another actor without losing much. He does convey an innocence that is becoming of Bart, but it never feels like something that someone else could not have done. Cummins is simply irreplaceable. Laurie has a combination of passion and bloodthirstiness that might be unmatched in all of noir. Much has been written about the sexuality of the relationship between Bart and Laurie, so I won’t parrot what others have come up with. What struck me in watching the film this time around is the lack of much on-screen romance between the two. Laurie gets off purely on the thrill and violence. 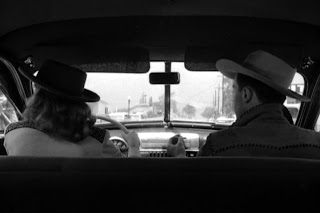 Technically, aspects of the film are equally as impressive. The heist sequences have long been celebrated and rightfully so. The famed sequence where they film a bank heist entirely from the backseat of the getaway car is brilliant. It is this kind of simple inventiveness that allows the movie leave its B origins in the dust. That entire scene has a marvelous unscripted, off the cuff feel, as Bart and Laurie casually converse as they drive up to the bank, talking as nonchalantly as if they were discussing the weather. The planned final robbery of the meat packing plant is also wonderfully filmed. Really, the action sequences in general are outstanding.

I might rate this one lower than many readers, but there is no question that it is not just an essential noir, but an essential film in American cinema. It is one that I make sure to revisit from time to time in order to appreciate how simply a great movie can be crafted.
Posted by Dave at 12:05 AM