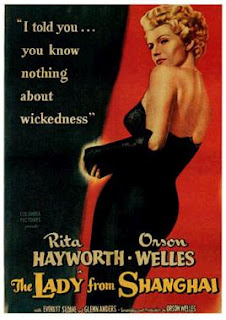 This placement is a real compromise, and is the result of my inability to take a definitive stand on my opinion of this film. After watching The Lady from Shanghai for the third time in preparation for the countdown, I still can’t completely decide what to make of it. I haven’t worked out whether it is a genuinely great movie, regardless of genre classification, or if it is just a passable film noir. I’m to the point now where I think that it is actually both – the high points are as impressive as anything else included in this series, while the lows reach depths that are quite low. I’ve gone round and round on this one – sometimes I feel like putting it somewhere near #30, at others #70. So I just split the difference and it lands here at #51. I’m sure that once this review is up and posted, I’ll regret it and wish that I had moved it even higher, but such is the peril of list-making…

The story behind The Lady from Shanghai is another slice of Hollywood folklore that I find so fascinating. According to the legend, Orson Welles was scrambling to come up with the necessary funds to complete his pet project of a stage adaptation of Around the World in 80 Days. The story goes that while begging Columbia head Harry Cohn for the money for his own production, he promised to deliver a major film to Columbia in return for the financial help. Welles was evidently bluffing, so when Cohn immediately asked what he had in mind, Orson turned to a copy of Sherwood King’s novel that was sitting nearby. Without the slightest inkling of how it would come off, and in fact not having read it himself, Welles began singing the praises of the novel and assuring Cohn that it would make a great film. Cohn agreed, forwarded the money, and when Welles’ play flopped soon after, he was then left to deliver the promised movie. Is there any truth in this apocryphal tale? Who knows, but it’s wonderful mythology. 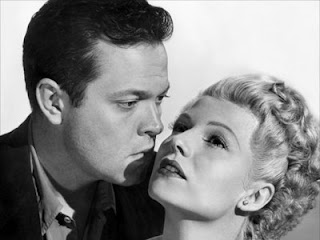 If a convoluted story was the sole hallmark of a great noir, then The Lady from Shanghai would be a lock for top-rank status. Welles plays Michael O’Hara, an Irish rogue who rescues the gorgeous Elsa Bannister (Rita Hayworth) from a mugging in Central Park. The two flirt a bit afterward, which to Michael is innocent enough. But a few days later he is hired by high-powered defense attorney Arthur Bannister (Everett Sloane) to work as a crewman on his yacht as they sail south. Bannister is the husband of the woman he saved in the park. Michael reluctantly accepts the assignment and on the cruise he is drawn into the intrigue that swirls around everything the Bannisters are a part of. Along the way he also meets Bannister’s business partner George Grisby (Glenn Anders), another shady character. At every turn it seems as if Michael is being offered a role in some kind of plotting or counter-plotting centering on the disabled Arthur. He initially rebuffs these offers – even from the enchanting Elsa – but eventually is swept up into a complicated plot that would take far more space to unravel in print.

Certain set pieces are so good, though, that the plot becomes inconsequential. Either you can embrace the bizarre nature of it all or you’re not likely to enjoy the film one bit. The story is strange, the visuals have a surreal, trippy quality to them, and everything seems off-kilter. Welles is talented enough as a director to make it all work. His usual inventive camera work and use of angles only adds to the bizarreness. Things like extreme close-ups – I’m thinking of the one of Grisby when he proposes the murder plot to Michael – only add to the peculiar nature of the story and its characters. And his filming of the cruise and cabana sequence is also outstanding. Rita Hayworth is also amazing as the alluring Mrs. Bannister. 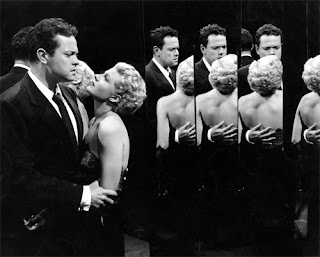 The famed house of mirrors sequence is rightly celebrated, but there are other memorable scenes that I consider just as impressive. The tension that is built when Grisby is courting Michael for his plot is very well done. As is the aforementioned “tiki-bar” scene when Michael happens upon Arthur, Elsa and George lounging in cabana chairs. It is then that Michael delivers one of the great monologues of any Welles film, with the famous “Then the sharks took to eating themselves” line that foreshadows how much of the story will play out.

Even with all of these high points, it’s still hard for me to decide what to make of it all. It’s far from seamless in its narrative and some have accused the story to be labyrinthine to a fault. There are certainly sections of the film that I think are downright bad – the courtroom scene near the end is horrendous – and agree that it could have been smoothed a bit. But perhaps that’s part of the charm and goes along with the bizarre nature of the entire production. Again, I’m still trying to come to terms with it all and I've watched it numerous times!
Posted by Dave at 12:05 AM