- "Innocent people can get into terrible jams too..."

Many of the actors and principal figures involved in production may be the same, but this 1950 release from director Otto Preminger is entirely differently from the critically-acclaimed Laura. Where Laura is sophisticated and witty, spinning a yarn centering on a high society whodunit,Where the Sidewalk Ends goes back to where noir thrives – the streets. In this film, Preminger walks the audience through a dark, gritty view of the underworld and gives an intimate view of how one many wrestles with demons that he has carried with him his entire life. Laura may be charming, but Where the Sidewalk Ends is rough. And both are great films. Laura quickly achieved the status that it deserves and is rightly held up as one of the preeminent films of the 1940s. Where the Sidewalk Ends, on the other hand, seems to get overlooked by other Preminger films. Perhaps people compare it to Laura, which is understandable considering the lead pairing, and see it as inferior. Personally, I go back and forth on which of the two that I prefer. Laura is undoubtedly the greater of the two, but in terms of a noir countdown like this, I have been tempted to place this one above it. In the end, since Laura has yet to appear in the countdown, I obviously chose the more conventional position. But I still think that Where the Sidewalk Ends is every bit as entertaining and well-made as its more popular counterpart. 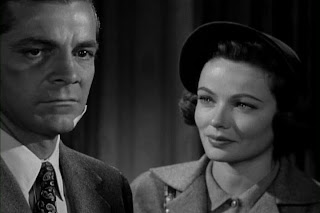 Dana Andrews stars as brooding NYPD Detective Sgt. Mark Dixon. Very early in the film it is established that Dixon has a history of brutality, working over suspects in order to get confessions. When he is sent to investigate a recent murder and robbery at a late-night dice game run by mob boss Tommy Scalise (Gary Merrill), he once again takes things too far. Rather than just roughing up smalltime hood Ken Paine (Craig Stevens), Dixon inadvertently kills the man in his apartment. In order to cover it up, Dixon fixes the evidence to look like a gangland rubout engineered by his longtime nemesis Scalise. It looks like an easy frame-up, as Scalise was involved in the original killing, but things are complicated when Dixon gets to know his own victim’s ex-wife, Morgan (Gene Tierney). Morgan and Ken Paine had been separated after a rocky relationship and as police continue their investigation, many – led by Detective Lt. Thomas (Karl Malden) – in the department begin to suspect Morgan’s father Jiggs (Tom Tully) as Ken’s killer. Dixon is then forced to begin working not only to keep suspicion away from himself, but to keep Morgan’s father from taking the fall. All the while, he and the Scalise gang remained locked in a cat-and-mouse game that will likely have violent consequences.

If I remembered where I read it I would give proper credit, but somewhere among the various film and noir books and resources I’ve perused over the years, I remember someone saying that while Laura is all about Gene Tierney, Where the Sidewalk Ends is all about Dana Andrews. I don’t completely agree with this assessment – I think that the character study of Andrews’ McPherson is far too interesting to completely disregard – but I get the general sentiment that is being proposed with such a declaration. It is true that the shadow of Tierney’s Laura Hunt hangs over everything that takes place in that film. In Where the Sidewalk Ends, though, it really is all about Dixon and the demons that he has battled his entire career as an officer. This is a man trying to live down the notorious past of his father, resulting in a detective who will go to any length in order to stamp out what he perceives to be crime or corruption. Maybe it is an often-used parallel to juxtapose the criminal methods that Dixon uses a detective with the equally brutal methods of the hoods he hunts, but it is still incredibly effective. With the exception of Morgan and her father Jiggs, nobody in the film is particularly likable, meaning that you’re scrambling to decide how you think the story should unfold – does Dixon pull off the frame? Does he go down for the murder? In the corrupt world in which he operates, does it even matter in the end? 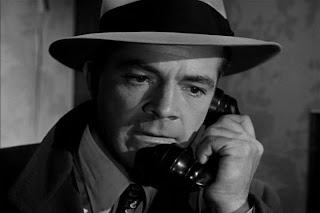 I don't think this one necessarily qualifies as underrated, but I do think that it pushes very close to being my favorite work from Otto Preminger.
Posted by Dave at 12:05 AM