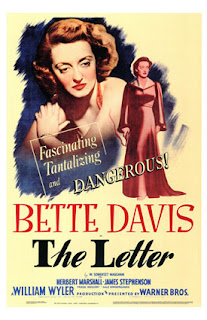 - "Strange that a man can live with a woman for ten years and not know the first thing about her..."

William Wyler might not be a name that immediately pops to mind in regard to a film noir countdown, and this 1940 movie from the celebrated director might not initially be considered when folks guess the films of this Top 30, but it is a longtime favorite. This is certainly a most personal choice, as the noir credentials of the film are not as strong as some of the other standards of the genre – it actually comes before the classic period, is set on an Asian plantation rather than traditional urban environs, and at times lays the melodrama on thick. But I still think that it qualifies for a countdown of this scope. The moral ambiguity of almost every character involved in the murder mystery, in conjunction with the wonderfully dark cinematography from Tony Gaudio, means that there is enough similarity between The Letter and other noir staples to justify its inclusion. Interestingly enough, the more noir books and resources that I have viewed recently, the more that I have noticed other places including it among their noir rankings and lists, so I’m not alone on this one. Plus, it’s a film that I simply adore and I have no intention of passing up the opportunity to pen some thoughts on it. 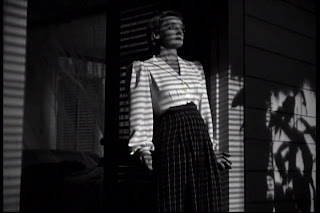 William Wyler and star Bette Davis worked together on three films, all positively received, but The Letter remains the most impressive for me. It is as much of a mystery as it is a noir. The film opens on a rubber plantation in Malaya, with gunshots ringing throughout the property as the lady of the house, Leslie Crosbie (Bette Davis), guns a man down on her front steps. Crosbie claims that she killed the man because he visited the house while Leslie’s husband Robert (Herbert Marshall) was away and tried to violate her. Finding the circumstances to be suspicious, the authorities arrest Leslie and move her to a Singapore prison to stand trial for murder. Leslie sticks by her story of acting in self-defense and is able to convince everyone of its veracity – except for family friend and her defense attorney Howard Joyce (James Stephenson). Joyce’s suspicions are heightened even further when he is approached by a native (Sen Yung) who notifies him that a letter exists that proves that Leslie and the slain man were actually lovers. Realizing that this letter would all but doom his client, Joyce faces a moral dilemma over how to handle the situation. Does he purchase the letter and keep the dirty little secret? Or, does he go to trial and let justice play out? Joyce is caught between husband and wife, unsure of how to handle the situation on both a personal and professional level. On one hand he feels a responsibility as an attorney, but there is an allure that surrounds the seductive Leslie that seems to manipulate him into doing what he asks.

The technical ability of Wyler is on display right from the beginning, as the movie starts with one of the great opening shots in all of cinema. Wyler uses a tracking shot to guide the viewer from a gorgeous view of the moonlight dancing over darkened fields, to a shot of a rubber tree being drained, then to a group of local workers relaxing after a long day, and finally to a small bird that is calm until the fateful shots ring out across the plantation. The camera then moves quickly to the entrance of the house in time to see a wounded man stagger out of the door and Leslie Crosbie coming up behind him and unloading the coup de grace. It is among the most memorable tracking shots that I have seen and is an impressive way to start the movie. Wyler works very well with director of photography Tony Gaudio. The use of moonlight and the way that it slices through everything on camera – cutting through blinds, rubber trees, gates – is gorgeous. I don’t know enough about the production to say where the movie was shot, but I’d bet almost anything that it was on a Warners studio lot. And that makes the visual achievement even more impressive, as Wyler and Gaudio are able to truly capture the dark, exotic feel of Malaya. 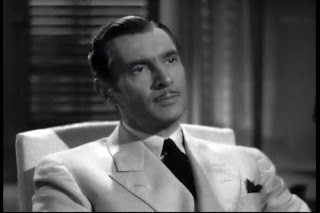 The reputation of Bette Davis is not one that I need to build up, but she gives another marvelous performance here. In fact, in terms of personal taste, I would place her turn here behind only her career-best role as Margo Channing in All About Eve. As Leslie, Davis is much calmer and understated, developing Leslie as manipulative, but in a much more calculating way. As good as Davis is, though, this is without question James Stephenson’s film. The moral flip-flopping that his character goes through is the most important aspect of the story. He is completely torn on what is the right course of action. Pulled from all sides, he seems to believe that there is honor in both options – refuse the extortion demands and uphold his oath as a lawyer, or be complicity in the lie and cover-up and avoid embarrassing and hurting his longtime friend. Stephenson is able to put across the anguish that Howard experiences. It is also interesting to note the ending that the Hays Code forced Warner Brothers to add onto the film, not allowing a murderess to get away cleanly. Oddly enough, I think this is one instance where a Code-forced ending actually works quite well. The ending is certainly a memorable one.

The Letter was well-received upon its initial release, receiving seven Academy Award nominations (Davis, Stephenson and Gaudio were all nominated, along with the great Max Steiner for Best Score) but came away without a single win. Its reputation today remains strong, but it is often overlooked in terms of Wyler’s overall body of work. It just might be my favorite film that he ever made.
Posted by Dave at 12:05 AM