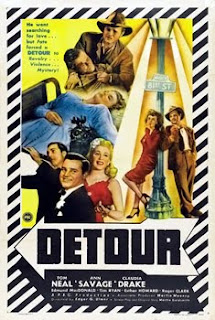 - “That's life. Whichever way you turn, Fate sticks out a foot to trip you…”

Peter Bogdanovich summed it up best when commenting on the work of Edgar G. Ulmer: “Nobody has ever made good pictures faster or for less money.” This most definitely applies to Ulmer’s most famous film, Detour. The circumstances surrounding its production are now legendary in noir circles. Made for Producers Releasing Corporation (PRC), which was considered low budget even among Poverty Row contemporaries, it probably would have been impossible to make Detour any faster or cheaper. Instead of following the detailed, 130-page script that Martin Goldsmith adapted from his own novel, Ulmer had to completely slash it, cutting and pasting what he could in order to produce it as quickly as the studio demanded. The entire movie was shot in six days and for under $20,000 dollars, and it looks every bit as cheap and thrown together as one would expect. It has no business being as powerful as it is, but it has remained enthralling for generations of cult followers and maintains a reputation as a cornerstone of the film noir canon.

The best analogy that I can produce to try and explain the appeal of Detour is comparing it to the music of raw blues or garage rock. Just as those forms of music are appealing because of the simplicity and pure emotion, Detour derives its power precisely because it maintains such a raw, filthy atmosphere. Let’s face it, the low budget surroundings and horrendous video quality are perfectly suited to themes as dark as those dealt with in film noir. Since I’ve already quoted one big name movie personality, I might as well add another. Roger Ebert put it perfectly when he said: “’Detour’ is an example of material finding the appropriate form.” This is absolutely true. Detour looks horrible – as it should. Al sees his life as having become a walking nightmare and whether intentional or not, Ulmer’s shoestring budget and lack of resources only serves to reinforce this. 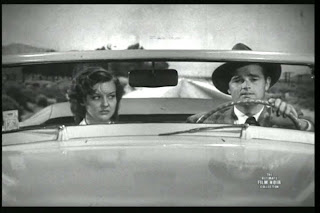 The story is simple, coincidental, and probably preposterous depending upon how you take it. Al Roberts (Tom Neal) is a New York nightclub piano player who decides to travel cross-country to reunite with his girlfriend Sue (Claudia Drake). Sue left for Los Angeles weeks before with hopes of making it big in Hollywood, but things do not go as planned. Unable to wait any longer, Al decides on a whim to surprise her in L.A. Hitchhiking his way across the country, Roberts is picked up by a gambler named Haskell (Edmund MacDonald) who offers to take him all the way to the coast. Continually popping pills as he drives, it turns out that Haskell has a heart condition and while Al is driving for him, Haskell slips off to sleep and never wakes up. Fearing that the police would pin the death on him, instead of alerting the authorities, Roberts decides to just assume Haskell’s identity – along with his money – and continue traveling. Things are going smoothly until he decides to pick up a female hitchhiker. The rough looking Vera (Ann Savage) turns out to the person that Haskell had picked up and kicked out of his car before stopping for Roberts. She knows that Roberts is a fake and threatens to run to the police if Al doesn’t do whatever she asks.

There are no performances that one would show in an acting class, but Tom Neal is incredibly effective in playing Al as the weary traveler who feels like the entire world is working against him. For the short period that he is on-screen, Edmund MacDonald is very good as the gambler on the cusp of hitting it big, recounting his struggles with woman and bookmaking. Ann Savage is seductively evil. But the real star remains Ulmer and the small things that he does to create a genuinely great movie. His cost-cutting and time-saving practices are almost funny to consider now, doing things like flipping negatives so as to be able to show Al moving in different directions. Most importantly for my reading of the film is the way that he returns to the same eerie shot of Al’s face, with everything around him blanketed in darkness except for the a strip of light that reveals his eyes. As Al recounts the story in a flashback, Ulmer continually returns to these eyes of a madman, adding a whole new layer to the film. This crazed look, combined with the rambling, incoherent nature of much of the narration, still makes me wonder if the entire story is not one demented man trying to rationalize his actions. Unable to cope with what he has done – killing the man who picked him up, murdering someone else later – he instead blames everything on Fate. Nothing is ever his fault; it is always Fate that is out to get him. This is not reliable information that we are receiving. I don’t know, maybe I’ve seen too many David Lynch films, but this is the feeling I get every time I watch it. 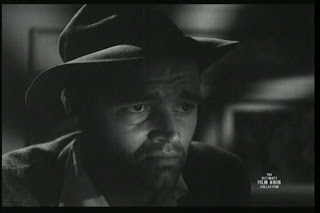 Detour remains a marvel and its legacy baffling to those that don’t care for it. I don’t know if an appreciation of Detour can be acquired. I could be wrong, but it seems to me that the film will either appeal to you at a very gut level or be far too camp to enjoy. For me, I don’t know that another noir has ever captured the grim outlook and sense of doom that permeates all of noir better than Ulmer does in Detour.
Posted by Dave at 12:05 AM