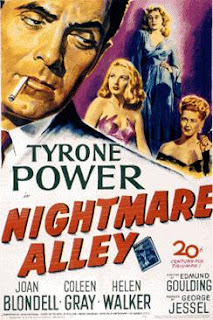 I suspect this placement might actually be looked at as criminally low, but it’s not getting any easier to separate the films at this point. If anything, the fact that I love 37 other noirs more than Nightmare Alley just speaks to the passion I have for the remaining films in the countdown. Make no mistake, Nightmare Alley is a sinister film noir, one that attempts to explore depths of bleakness and horror that few other contemporary films dared touch upon. The seedy underbelly of the entertainment world that it explores is at times downright sickening. It is filmed with a bizarre quality that arguably matches that of The Lady from Shanghai, which only adds to how uncomfortable one can made while watching it. If it doesn’t quite reach the levels of depravity that it seems to be approaching, it is likely only due to standards of decency in Hollywood of the 1940s.

Based on a novel written by troubled author William Lindsay Gresham, Nightmare Alley follows the lives of small-time carnival performers that dream of hitting it big. Stanton Carlisle (Tyrone Power) sees his ticket to international fame in the secrets of a mind-reading act that is tightly guarded by Zeena (Joan Blondell) and her drunk husband Pete (Ian Keith). Zeena and Pete strictly guard the valuable code, not wanting to make the secret known, but when Pete dies from drinking a bottle of bad alcohol, Zeena decides to teach Stan. Despite the help from Zeena, Stan cannot resist the beautiful Molly (Coleen Gray), another carnival worker and soon the two are married and ousted from the traveling carnival. Stan views this as his big break, as he enlists Molly to help him run the act he inherited from Zeena. The act is a rousing success, with “The Great Stanton” and Molly packing swanky nightspots and earning massive wealth. But Stan yearns to grow things even bigger, and when he enlists the assistance of shady psychologist Lilith Ritter (Helen Walker), he ups the ante even further. Using conversations secretly tape recorded by Lilith, Stanton is able to use private information in his “mind reading” exercises. Stan then begins mercilessly toying with naïve victims before his own fall from grace. 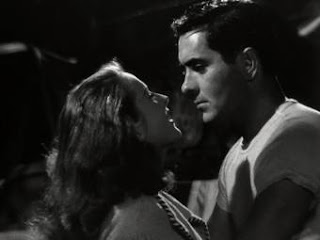 Personally, I don’t think it’s even close; this is the best work of British-born Edmund Goulding’s career. The world that he creates is one of almost inescapable sleaze. This is not to say that all of the characters are completely immoral – both Zeena and Molly demonstrate some admirable qualities and both decide that they have to draw the line somewhere far before where Stan would. But the world, and particularly the industry, in which they operate is thoroughly sordid. A world where broken down men lose all dignity and are reduced to working as geeks just to satisfy their basic (read: alcoholic) needs. Where even well-intentioned performers are still making money by toying with naïve spectators. Even when Stan and Molly are performing in swank nightclubs, catering to a wealthy clientele, things still feel sleazy, as if you are watching a performance that shouldn’t be happening. It just feels too manipulative, even to you as the viewer. The vision of director and cinematographer Lee Garmes align perfectly, with Garmes shooting almost everything to look like a hallucinatory descent toward psychosis.

Nightmare Alley also features some of the most reprehensible characters in noir, primarily in Stan and psychologist Lilith Walker. Tyrone Power exudes the type of arrogant charisma that is as repugnant to the viewer as it impossible to resist for those that he seduces in the film. His downfall comes when he reaches too far in his ambitions and it begins to appear as if he actually believes that he has these supernatural powers that he has feigned for years. Lilith is equally as revolting, disguising her ambition in more respectable ventures.

And wow… that finish. Frighteningly unforgettable.
Posted by Dave at 1:25 AM