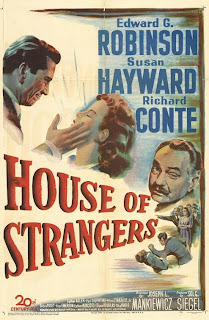 House of Strangers is a sleeper, I think. It’s the type of movie that everyone recognizes as being well made – I’ve yet to come across anyone who has watched it and did not like the movie to some degree. Yet, it is not commonly listed as being considered with the best of film noir. That’s unfortunate, because I don’t hesitate to place this highly in such a countdown. In the able hands of director Joseph L. Mankiewicz, and boasting a bevy of big name talent, it is another prime example of how effortlessly the studio system could churn out outstanding dramas. This is one of my favorite releases to emerge from 20th Century Fox in the 1940s. 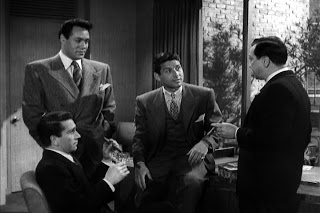 The story is like a The Godfather in reverse. Gino Monetti (Edward G. Robinson) is a barber who immigrated to New York from Italy, setting up shop on Mulberry Street in Little Italy. Through sheer determination and hard work, Gino manages to accumulate enough funds to start a local bank that he singlehandedly runs and controls. Paying no attention to banking regulations and legal technicalities, Gino runs things on a whim, loaning money to whomever he pleases and demanding whatever interest he deems sufficient. The bank brings the Monetti family previously unimaginable wealth and Gino grows into a domineering patriarch, raising four sons that he completely dominates. All four sons grow to work in Gino’s bank – Joe (Luther Adler), Pietro (Paul Valentine), and Tony (Efrem Zimbalist, Jr.) as bank employees; favorite Max (Richard Conte) keeping his law office inside the family building. Gino continually declares that he has built this banking empire for his sons to inherit, but until his death he treats everyone but Max horribly. All three of the sons that work directly for him detest him, unable to bear his insults, low pay, and general disregard. So when bank regulators swoop in and begin inspecting the books of the business, the trio is all too glad to see Gino forced out of the banking business. In a hostile takeover, they assume control of the bank, while rival brother Max is hauled off to prison on jury tampering charges while trying to keep Gino out of jail. The film actually opens with Max’s release from prison and an uneasy reunion with his brothers. The story that brought them to that tense reunion is then remembered by Max when he returns to the family home.

Like the best Joseph Mankiewicz films, the strongest asset (outside of typically strong writing) is the ability to have the entire cast pull their weight. Each performance eventually becomes strong enough to contend with the domineering Gino Monetti. Perhaps there is some stereotyping in his performance of the immigrant Gino, but Edward G. Robinson does shine in the role. He really is a powerhouse, dominating every scene he is in – which is precisely how it should be with the personality of Gino Monetti. It is very interesting to watch the progression of the character and track how you as the viewer respond to him. For the first half of the film, he is overbearing, a man who treats everyone with complete contempt. Compassion is instantly felt for the sons who can do nothing to please him. But when the government begins coming for him, and everyone but Max refuses to help their father, he seems a bit more sympathetic as he explains to his sons why he has treated them the way that he has. As he talks about how he has built the business up so he can one day hand it over to them, it seems genuine. In a final analysis, it is likely that Gino means what he is saying, but is too insecure to let this happen until it is too late. 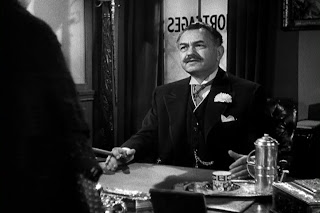 Richard Conte and Susan Hayward also work very well together, giving Max and Irene a fiery relationship. Richard Conte has far too many outstanding roles in his career for this to be considered his best, but it’s still incredibly strong. Really, this is just an all around, well-made 40s major studio noir. It should be obvious now that I’ve recently become a big Joseph Mankiewicz fan and think that it’s unfortunate that many folks don’t go beyond All About Eve and a few select others in his filmography. Outside of that all-time classic, this is probably the best that I’ve seen from him, which is a high compliment considering he made a number of great films in the 40s and 50s.
Posted by Dave at 12:05 AM