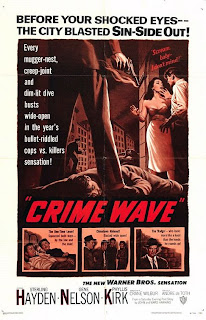 - “Once you do a stretch, you're never clean again… you're never free… they've always got a string on you, and they tug, tug, tug.”

In the hands of a less talented director, Crime Wave would be little more than a formulaic, by-the-books film noir. The storyline is fairly conventional, chronicling the travails of Steve Lacey (Gene Nelson), a recently paroled convict who is fighting to stay on the straight and narrow. In the short time he has been out of prison, Lacey married his beautiful wife Ellen (Phyllis Kirk) and was hired as an airplane mechanic. The lure of his previous associations is never far away, though, as evidenced by the routine late night phone calls and summonses that past acquaintances make on Steve. But with the urging of Ellen, he manages to stay clean and lead a legitimate life. That is until three former prison compatriots bust out and go on the run. Knocking off easy targets to scrape together enough money to make it to Mexico, things go awry for the fugitives when they gun down a police officer at a gas station. In the confusion, one of the men is wounded and stumbles to the doorstep of Lacey. Not wanting to get involved, but realizing that he can’t call the cops and rat, Lacey tries to walk a fine line between the police on one hand and his former prison pals on the other. He desperately wants to be rid of men like Doc Penny (Ted de Corsia) and Ben Hastings (Charles Bronson), but at the same time he cannot give up the “keep your mouth shut” code of the streets. Fearing that one wrong move will lead to harm done to Ellen, Lacey is reluctantly drawn into helping the gang knock off a bank and make a dash for the border. 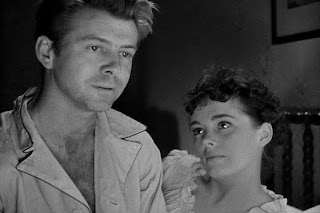 Lacey’s life is even more complicated by the constant pressure applied by Detective Sims (Sterling Hayden), a man who believes in the adage “once a criminal always a criminal.” From the start he is convinced that Steve is in cahoots with the escaped prisoners and is working with them. Sims is obviously a top-rate detective, with the ability to remember criminal histories and M.O.s when given only a name, and it is this intuition that quickly leads him to Lacey’s apartment. Much of the story is set up in a way that actually frames Sims, the straight-laced cop, as the villain. His constant goading of Steve, insisting that he can’t be reformed, becomes just as abrasive as the rough tactics of Doc and Hastings.

Probably better known for his work in horror and westerns, director André de Toth is an unsung titan of film noir. He made only two full-blown noirs, but both are true masterpieces. As I said earlier, it is his skill that elevates Crime Wave to something better than a common police procedural. He adds minor flourishes and details that give it a distinctive feel. Modern directors and screenwriters could take a hint in how de Toth refrains from beating the viewer over the head with these elements. He just throws them out there, lets the viewer take them in, and proceeds with the story. Things like Sims’ habit of chewing on tooth picks because he can no longer indulge in cigarettes. The obvious incorporation of police minutia is there, but not overly dwelled upon. De Toth follows messages through the dispatch room, blares repeated descriptions broadcast over police radios, but all of this just seems to be happening. The camera and narrative focus on the characters – all of which are colorful to some degree – but so many of these details are taking place around Lacey, Sims, and the fugitives. Every character in the film has a story, a unique personality, some kind of distinctive mannerism, and de Toth shows each of them. Besides the characterizations and inclusion of such details, the exterior photography of men creeping throughout the darkened streets of Los Angeles is marvelous. 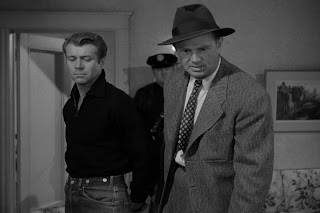 The type of forced Hollywood ending that is so commonplace in crime films of the 1940s and 50s does put a damper on the conclusion, but even this is not enough to mar an otherwise outstanding movie. Sims’ sudden personality change, admitting that he might have been wrong about Lacey, does feel a bit awkward but given the Code that still reigned at the time, it has to be accepted. Despite this misstep, Hayden still shines as the grizzled police veteran and is used by de Toth to masterfully blur the line between good and bad, right and wrong, hero and villain. As a clean, determined, albeit overzealous cop is Sims a hero or a villain? For most the film it is almost impossible to decide. This blurring of roles is the epitome of film noir.
Posted by Dave at 12:05 AM