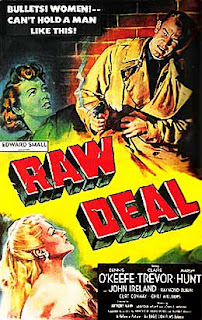 Raw Deal has to be the archetype for how a truly great low-budget film noir should look. I hesitate to say the prototype for how _any_ film noir looks, because there is definitely a different feel to the John Alton cinematography here as compared to something like equally remarkable work from Nicholas Musuraca or John Seitz in larger scale productions. That gritty, shoestring budget look is part of the appeal, though. Realizing how Alton and director Anthony Mann manage to get such striking results in creating a world where everything is at least partially shrouded might actually be more impressive. Everything feels covered by a shadow, creating an almost insufferably claustrophobic atmosphere. Put simply, in all of its low budget glory, it looks spectacular. It’s the kind of film that should be put on late at night, without a single light on, so as to savor the deep darks and slivers of light that Alton judiciously allows to creep onto the screen. 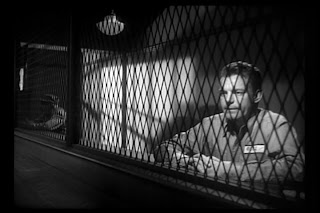 Fortunately, the visuals are not the only reason to appreciate Raw Deal. There are also some very good performances. Dennis O’Keefe – who a year earlier was cast as an undercover hero in Mann’s T-Men – shows his versatility here in playing a manipulative antihero. He is Joe Sullivan, a prisoner who took the fall for gang higher-ups, who badly wants out of prison. Unable to wait for lawyer's assistant Ann Martin (Marsha Hunt) to legally press his appeal, Joe uses girlfriend Pat Cameron (Claire Trevor) to bust him out of jail. Now understanding that he was framed to take the fall by crime boss Rick Coyle (Raymond Burr), he vows revenge. Stopping at the unsuspecting Ann’s home after his escape, and feeling heat from police in the process, Joe decides that he can’t leave Ann behind to alert the authorities. So he brings her along for the ride, creating instant tension between longtime girlfriend Pat and his new love interest. Ann wants no part of Joe’s plotting and continually urges him to turn himself in, but gradually even she is won completely by Joe. As the struggle between Joe and Rick intensifies, she is eventually driven to perform acts she never thought possible.

The role reversal is interesting, as there is no femme fatale to spur the action. The closest approximation to such a character is actually O’Keefe’s Joe, who is proves to be irresistible to Ann, eventually leading her to murder. Joe maintains at least some redeeming qualities, though, as he eventually realizes that Ann deserves much better than a life on the run with him. I’ll make another bold statement now, too, in declaring that this is the finest work I’ve ever seen from Claire Trevor. I know that she won an Academy Award this same year for Key Largo, but here she is perfect as the worn out gun moll. She recognizes that she has just one last shot at happiness with Joe and feels it slipping away as Joe and Ann grow increasingly closer. She is too loyal, too attached to Joe, to simply walk away. 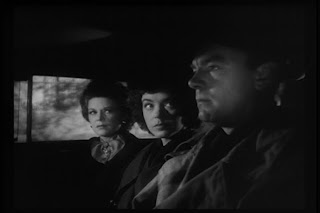 This was only the second film that Mann and Alton worked together and this is arguably their greatest effort. There are some individual scenes that are so memorable that I can replay them over and over in my mind. The prison break, with Joe sticking close to the perimeter wall as guards fire down from a nearby tower. Or Joe’s surreptitious entry into Ann’s apartment, startling her as she slowly peers through the darkness to realize that the man she visited in prison just the day before is staring down at her. Or maybe the best is the concluding showdown between Rick and Joe, with the two duking it out as fire rages all around them.

It pains me to see such an outstanding film at #39, but I can’t find any way to move it up considering what sits ahead of it. This is no slight. It is one of Mann’s best and a superb example of doing more with less.
Posted by Dave at 12:05 AM