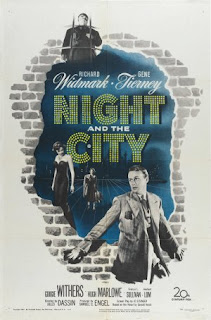 With subpoenas ready to be unsealed and personalities throughout Hollywood on the verge of being called before the now infamous House Un-American Activities Committee to answer questions regarding their political persuasions, suspected leftist sympathizer Jules Dassin scrambled to make it out of the country before the authorities tracked him down. Hightailing it to London, well out of reach of any potential subpoena servers, Dassin next had to quickly find a script and begin work before studio bosses yielded to pressure to blackball him. It is amazing to consider that in the face of such pressure, and with the mad dash that took place to find a suitable story and screenplay, that Dassin produced what many consider to be the finest film of his career. Mirroring the struggle that his professional and personal life had become, Night and the City is without question the bleakest vision that Dassin ever expressed in cinema. This one is dark, without any real winners, remaining as bleak and pessimistic as any film of the entire era.

Richard Widmark is one of the most celebrated of leading noir actors, but his turn as Harry Fabian may be the best role of his career. If it is not quite as bombastic as his blistering Tommy Udo, it is only because Fabian is nowhere near as sadistic as the murderous Udo. But Fabian makes up for this deficiency with his unbridled ambition and scheming. Fabian is a smalltime hoodlum, a tout for a local nightclub that makes his money by steering customers to his employer’s establishment. At the same time, he is constantly on the lookout for potential new scores. As a result of his scams and thefts, Harry is constantly being pursued by past victims and creditors. To escape such pursuers, Harry often hides out in the apartment of his naïve girlfriend Mary (Gene Tierney), who also occasionally serves as the bankroll for his harebrained plans. All of his past plans have failed, but he soon believes that he has hit the jackpot. He plots to take over the professional wrestling industry in London, teaming with famed wrestler Gregorious the Great (Stanislaus Zbyszko). But the plan is harder than it sounds, as Gregorious’ son Kristo (Herbert Lom), a powerful racketeer, currently runs the business and has no plans of relinquishing control. Playing father against son, partner against partner – really anybody against everybody but himself – Harry’s only goal is to cash in personally. 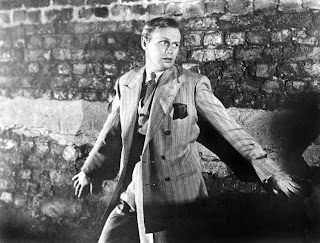 There are no forced happy endings in Night and the City. Things feel irrevocably doomed from the start and that mood never lets up. What makes it so distinctive is that the doom of it all almost feels correct. Touring the underworld of London, there are few characters presented that are in the least bit sympathetic. Fabian, who I suppose is the nominal hero, is far from likable. His boss and partners Phil Nosseros (Francis L. Sullivan) Helen Nosseros (Googie Withers) are only slightly less ambitious and ruthless than Harry. Kristo is identified as a leading hoodlum and racketeer. Even though he is being pitted against his father, it’s hard to feel sorry for an unrepentant hood. Mary, I suppose garners some sympathy, as she seems to want nothing but peace for her completely opposite boyfriend. Sill, Gregorious remains the only one that I see as a true victim. All of this means that while the nihilistic nature of everything remains jarring, in some weird way it is fitting. And perhaps that is what makes it so disturbing.

Never did a Jules Dassin film look better than Night and the City. The photography of the streets of London is the perfect look for a film noir, filmed to as ominous and dark as anything set in New York or Los Angeles. The night clubs and streets of London are shot in such a way to make them feel unbearably claustrophobic, reinforcing the fact that while London may be a big city, eventually Fabian is going to run out of places to hide from his problems. The contrast between light and dark is as stark here as anywhere else in noir.

The rating here may be a bit low, but personal preference is an even greater factor in trying to separate these final thirty. There is no denying the power of this film and what an incredible achievement it is in the career of the great Jules Dassin.
Posted by Dave at 12:05 AM