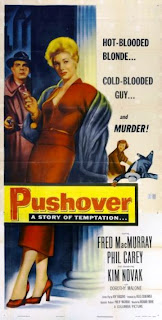 This one is likely to be looked upon as a stretch in the ranking, as traditionally Richard Quine’s Pushover has been discarded as an inferior imitation of the classic Double Indemnity. In terms of greatness, this one wouldn’t register in a countdown, even one this large in scope. So my own taste and discretion is the main factor for placing it inside the top half of the countdown. Is it derivative of Double Indemnity? Sure it is, but I’m not claiming that it’s at the same level as that masterpiece. But I stand by the contention that this one has been unfairly cast aside precisely because of the Double Indemnity similarity, despite the fact that there is enough variation to keep it fresh. It may not be completely original, but the claustrophobic atmosphere – with similarities to Rear Window (released later in 1954) as well – that Quine creates, and the lead performances of Fred MacMuarray and Kim Novak, I am at a loss as to why Pushover is so easily overlooked.

The film opens with a bank robbery gone awry. Things are going smoothly until a security guard tries to play the hero and is gunned down in a gun fight. The robbers escape with $200,000, but their leader Harry Wheeler (Paul Richards) is quickly identified as the mastermind and is pursued by the authorities. Detective Paul Sheridan (Fred MacMurray) is charged with locating the missing money and to do so he decides to try and get close to Wheeler’s girlfriend Lona McLane (Kim Novak). Going undercover, Paul begins wooing Lona in order to extract information about Wheeler’s whereabouts, but in the process the two genuinely begin to fall in love. When Paul finally reveals to Lona that he is a police officer, Lona uses her pull to draw the detective into a dangerous scheme. She proposes the two of them murdering Wheeler when he tries to come back to her, then running off together with the robbery money. At first, Paul rejects the offer, but eventually comes back to Leona and agrees. Paul is then left to figure out a feasible plan that takes into account the significant surveillance operation that he and the police have put together. From a building across a courtyard that looks directly into Lona’s apartment, the police are maintaining 24-hour surveillance. He is juggling things very well, keeping his fellow officers completely clueless, until Wheeler finally shows up. Things do not go as planned, and after complications with the killing of Wheeler, Paul is then forced to go even further to keep his partners from catching onto him. 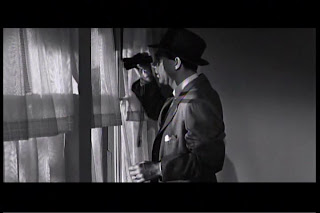 The close confines of everything are what most come through. The deeper that Paul gets drawn in, the more apparent the claustrophobia becomes. The police are able to see everything that Lona does, can listen to every call coming in and out, which means that any maneuvering that Paul tries to do to further their plot is also potentially there to be observed. This creates some wonderful opportunities for Quine to amp up the tension with very simply situations. Innocuous events like a missed telephone call or a glance down a hallway are enough to create tension that matches high-octane thrillers. The more chances Paul takes, the more suspicious that his colleagues become, and you begin to wonder how long he can string things along before everything falls apart. It is not really constructed like an action movie or conventional thriller, but it is just as intense. Adding to the overall noir atmosphere is the fact that literally everything takes place at night, in the close quarters of an apartment or on the dark streets of L.A. just outside the building.

MacMurray is his always-solid self, a staple noir actor for playing intelligent men who can’t help but get themselves in over their head. The revelation here is Kim Novak in her first starring role. Her Lona is another element that distinguishes Pushover from Double Indemnity. Lona is not an ice-cold villain in the Phyllis Dietrichson mold. She undoubtedly manipulates Paul into the original plan, but she is no puppetmaster directing what he does. Paul takes control of things once the plan is set in motion. The other unique thing about the dynamic of this relationship is that Paul and Lone seem to genuinely care for each other. 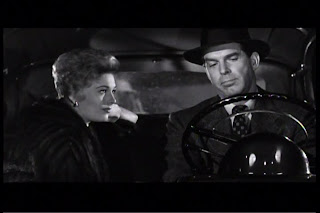 This is the second time that a Richard Quine film has appeared in this countdown, and considering that I have only ever seen two movies that he directed, that is quite an accomplishment. On the basis of those two efforts, I look at him as an unsung champion of noir. I’m sure I value this one far higher than most that read this, but like Drive a Crooked Road, I can’t deny how well it works for me.
Posted by Dave at 12:05 AM