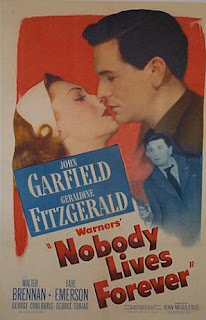 Here is a personal favorite and yet another film that I consider to be incredibly under-viewed and underappreciated. Since it has no official DVD release, this is one of the first noirs that I ever actively sought a burnt copy of. I became a huge fan of John Garfield after seeing him in The Postman Always Rings Twice and Body and Soul, and then I read about this 1946 release and became very fascinated. Being a complete novice in terms of going about acquiring unreleased movies, it took a little research, but I eventually tracked down a copy and felt vindicated after thoroughly loving it. It is another virtuoso performance from Garfield, who stands out from what could otherwise be viewed as textbook characters. On the strength of his performance alone, Nobody Lives Forever deserves a spot in this countdown. It just so happens that I love a few other elements as well, which accounts for such a high placement.

Nick Blake (John Garfield) is injured in World War II and is discharged after being wounded. Returning to New York City, Nick begins to survey his hometown. Before leaving for the war, Nick had become a major player in the city’s underworld, running various scams and rackets and amassing a small fortune that he left in the care of his girlfriend Toni (Faye Emerson). When he and longtime pal Al Doyle (George Tobias) check up on Toni, they learn that she used that money to set up herself up in a club with a new partner. Extorting a payoff from this new club, Nick and Al decide to take their profits and leave for Los Angeles and live a peaceful life of luxury. But simply stepping away from their old lives is not easy, as even in L.A. they run into old grifter acquaintances like Pop Gruber (Walter Brennan) and Doc Ganson (George Coulouris). Ganson entices Nick to come in on a scam to fleece a widow out of her inherited fortune. Nick agrees, but only if he can run it. He thus begins wooing Gladys Halvorsen (Geraldine Fitzgerald), but inexplicably begins to genuinely fall for her. When he tries to pull out of the scheme rather than hurt Gladys, things begin to spiral out of control – Toni suddenly shows up from New York and Ganson decides to finish the scam on his own terms. 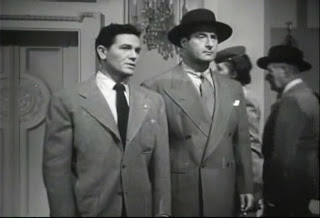 Released the same year as The Best Years of Our Lives and earlier countdown selection Somewhere in the Night, this film covers similar territory. The uncertainty of where one fits in a postwar society is addressed at every turn. Nick feels it doubly, as not only is he a returning veteran, but also a career criminal that suddenly no longer has a solidified position in the underworld. This insecurity is only reinforced when Nick decides to leave New York and seek a fresh start in Los Angeles. Even in L.A. he is reminded of how unsettled things are – former friend and mentor Pop Gruber, a onetime high roller, is reduced to petty scams and work as a pickpocket, and former rackets heavy Doc Ganson sits around a local bar dreaming up schemes that he never seems able to pull off. It is as if Nick wants desperately to move on to new things in his life, but he can’t ever quite completely break away from his sordid New York City roots.

This is not a particularly dark film, especially in comparison to other noirs of the era. Although there is plotting done in traditional smoke-filled backrooms, the majority of the story takes place outdoors on beaches or in a posh resort. The focus on the developing relationship between Nick and Gladys, along with lighthearted moments peppered throughout the story (particularly coming from George Tobias’ good-natured Al Doyle), has the movie at times leaning toward straight drama. But the existential journey of Nick Blake, along with the darkened conclusion on a foggy dock, is enough to qualify with my malleable definition. 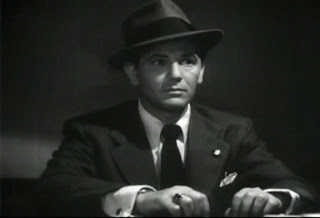 The legend is that Humphrey Bogart was originally offered the lead and turned it down, which then allowed it to pass to Garfield. It’s another of those fortuitous breaks that I enjoy pointing out in Hollywood history. I love Bogey, but I don’t know that he could have bettered Garfield’s performance here, as the character seems perfectly written for him.
Posted by Dave at 12:05 AM