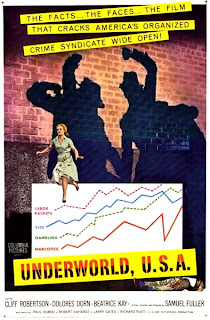 If it is not my favorite film from maverick filmmaker Samuel Fuller, Underworld U.S.A. is at the very least my favorite of his crime dramas. The only reason I hesitate to anoint it my top choice in his filmography is because I think so highly of his outstanding Korean War film The Steel Helmet. But that is an argument for another time and another series. What is important for now is that Underworld U.S.A. the typical gritty, ruthless picture that Fuller arguably did better than any of his contemporaries. Although it falls outside of the typical timeline of noir in Hollywood, there is no doubt about including this in the countdown rather than holding it off for a neo-noir series. It might have been made and released in the 1960s, but it bears the hallmarks of the great crime films of the 40s and 50s.

To me, Fuller tends to be at his best when his stories are set up as some sort of war or conflict – whether they actually are in such a setting, such as in war movies, or if they take place within the underworld. Fuller was a director who was very adept at focusing on a small, tight-knit group and chronicling how they struggled to stay together in the face of some sort of adversity. This applies to the survivors in The Steel Helmet, the privates and sergeant of The Big Red One, and criminal organizations like in The House of Bamboo. In this film, though, he creates a genuine loner for a hero and pits him against not just the underworld, but the entire world. With the exception of the maternal figure Sandy (Beatrice Kay) and eventually his newfound love interest Cuddles (Dolores Dorn), Tolly Devlin is a man who asks for no help and expects no breaks. His grim determination to avenge the death of his father that he witnessed as a teenager is the only thing that matters to him. So in that sense, the story is set up like a war, with Tolly operating as a one man assassin intent on picking off each of the four gang leaders that murdered his father. 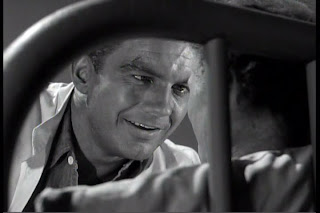 Cliff Robertson deserves all the praise in the world, because I can’t think of another performance where an actor is able to combine such coldblooded determination with actual sympathy. Tolly is ruthless, someone who doesn’t just want to see his father’s murderers taken down – he wants to make sure that _he_ is the one who destroys them. Perhaps what makes such a merciless character sympathetic is the fact that Fuller is very quickly able to create a past for Tolly. Even though we see the childhood Tolly for only a few quick sequences to start the film, he is established as the kind of young lost soul that you can’t help but root for. And through all of the tough talk and bravado that Tolly displays in dealings with thugs and hoodlums, Fuller tempers it somewhat by displaying things like his enduring loyalty and devotion toward Sandy.

The combination of Fuller and cinematographer Hal Mohr results in some wonderfully stark photography and memorable individual scenes. The film opens with a bang, as they film the beating death of Tolly’s father by showing a brick wall and watching the shadows of the men performing the assault. Many great sequences follow. Probably the most unforgettable for me is when an imprisoned Tolly finds out that one of his father’s killers is in jail with him, on the verge of dying in the prison hospital. Wanting to have a hand in his passing, Tolly slyly manages to get himself a job as an orderly in the hospital. He confronts the dying Vic Farrar (Peter Brocco) and under the auspices of getting him to admit his sins before his death manages to extract a confession and the identities of the three other killers. Fuller films it using extreme facial close-ups on Tolly and Farrar, giving the first hint that Tolly might actually turn into just as sadistic a person as those he is hunting. And it’s not all just about Tolly. As is the case in all Sam Fuller films, women play pivotal roles. Both Dolores Dorn and Beatrice Kay are strong enough to go head-to-head with Robertson’s Tolly. 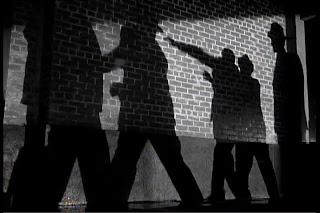 Writing all of this makes me question why I don’t push it a little further up the countdown, so it’s possible that by the time I actually publish this it will have moved up from the time that I actually penned it. This is just high quality filmmaking from a man who was capable of turning out top-notch movies regardless of budget, time constraints, talent, or any other factor. In this case, the fact that the performances and photography are up to Fuller’s immense talent only raises the finished product even higher.
Posted by Dave at 12:05 AM