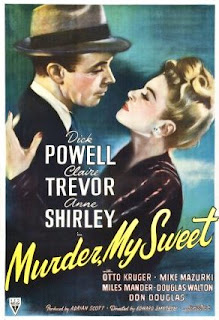 - “I don't know which side anybody's on. I don't even know who's playing today…”

Humphrey Bogart may always be identified as the Hollywood personification of Raymond Chandler’s private eye Philip Marlowe, but Dick Powell can make a strong case for turning in an equally exciting performance. Murder, My Sweet may not be as great a movie as the Bogart-led The Big Sleep, but it’s much closer than the general consensus seems to recognize. Powell is a major reason why. His take on Marlowe – which was actually made the same year as The Big Sleep, even though that film was not released until two years later – is distinctive from that of Bogart. With Powell, Marlowe is even wittier, even more cynical in his observations (yes, that is possible). Dick Powell sells it all perfectly, delivering the sharp one-liners with a deadpan expression that is both laugh-out-loud funny and knowingly tough. 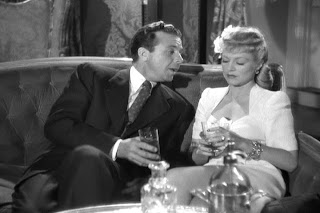 In this chapter in the cases of Philip Marlowe, the PI is hired by a recently paroled ex-con named Moose Malloy (Mike Mazurki) to find his former girlfriend Velma. Marlowe comes up empty despite some interesting leads, particularly after he is sidetracked after being hired by the regal Lindsay Marriott (Douglas Walton). Marriott offers Marlowe $100 to accompany him on a late-night mission to buy back some stolen jewelry. Instead of the transaction going smoothly, Marlowe is knocked unconscious and Marriott is murdered. Realizing that somebody is likely trying to pin a murder on him, Marlowe makes his way to the home of the jewels' owner, Helen Grayle (Claire Trevor), to tell her what happened. Grayle, wanting to recover the necklace before her much older and wealthy husband learns it is missing, decides to hire Marlowe herself. The deeper that Marlowe digs into the case, the more that he uncovers and realizes that the various cases that he is working are tied together. He eventually begins working not just to recover stolen jewelry, but to keep himself from either being killed or framed for a murder.

Not having read Farewell My Lovely, I can’t specifically comment on which parts of the screenplay are pure Chandler and which should be credited to screenwriter John Paxton. My guess is that the caustic humor found throughout the movie can in some way be traced back to Chandler, as everything I’ve read from him oozes such cynicism. Still, Paxton has to be credited for taking the source material and its inherently convoluted plot, and creating an impressive script. Even if the great Marlowe zingers come entirely from the pen of Raymond Chandler, then I’ll at least credit Paxton with selecting the choicest of them to include in the screenplay. The traditional flashback structure also flows very well here, with the story being told by Marlowe in a police interrogation room, immediately making clear that Marlowe finds himself in a hell of a predicament. 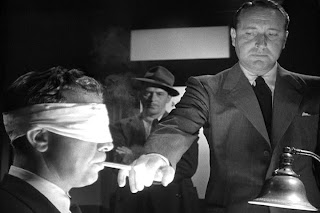 The direction by Edward Dmytryk is superlative. I still think that the first few minutes of this film are archetypal noir. An opening in a police station, with Marlowe’s face in bandages and anxious police officers imploring the private eye to tell them the whole story. Reluctantly, Marlowe agrees and as he begins telling the tale, the camera swings toward the streetlights shining in through an open window. As Marlowe continues talking, the camera pulls back to show the P.I. peering down through a window, staring at the same streetlights, and kicking off the flashback story. Slowly, with flashing lights glaring off the window, the shadow of a large man (Moose Malloy) is seen standing behind Marlowe in his darkened office. There are other memorable scenes – the drug induced hallucination is well remembered – but it’s this early sequence that sticks with me most. It’s also interesting to note the connections of this movie and the future trouble that Dmytryk would have with the House Un-American Activities Committee. As is well-known, Dmytryk was called before HUAC twice. The first time, he refused to cooperate with the committee and was jailed for contempt. In 1951, he was called back to the committee and decided to name names, answering questions concerning his own membership in the Communist party and various Hollywood figures that he claimed were trying to influence him to including communist propaganda in his films. One of the names that he listed was Adrian Scott, the producer of Murder, My Sweet. The result of Dmytryk’s testimony was disastrous for Scott, as he was blacklisted and unable to find work in Hollywood. 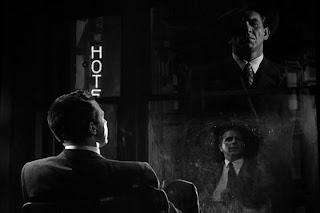 But I’m not here to judge Dmytryk’s legal maneuvering, I just want to celebrate this great film that he created. It is a cornerstone of any noir collection and Dick Powell turns in the best performance that I’ve ever seen from him.
Posted by Dave at 12:05 AM